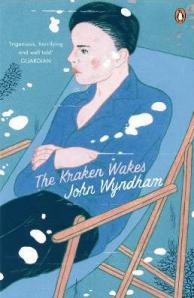 In continuation of my 2011 China Miéville binge-fest, I’ve recently acquired his “Cthulhu cult” novel Kraken (review pending).  Before reading it, however, I thought it prudent that I at least nominally educate myself in the genre to which Kraken pays homage.  So I read The Kraken Wakes [1953] by John Wyndham first. It’s an SF novel with ‘Kraken’ in the title, so surely it’ll be ‘of type’ with Miéville’s book, right?

The Kraken Wakes couldn’t be more different, unrelated or detached from the tradition in which China’s Kraken book is written.  Darn it. Serves me right for conducting zero research and judging a book by its name alone, I guess.  So much for the Kraken-on-Kraken compare and contrast exercise I’d hoped to write later this week.

But, as I’ve read the Wyndham book anyway, here’s a review…

In po-faced defiance of its title, The Kraken Wakes contains no tentacular sea monsters of Scandinavian mythological origin whatsoever. Neither does it so much as allude to giant squid, octopusses or cephalopods of any kind.  Rather, the title is a bastardisation of a line from the Tennyson sonnet ‘The Kraken’ [1830], which is a sea shanty-esque verse about the propensity of the ocean to be simultaneously both calm and deadly.  The book itself is a fictional work of journalism by Mike Watson (with some naff and unsubtle suggestions of a correlation with Sherlock Holmes’ sidekick), who narrates in the first person and describes his experiences of (and involvement in stopping) an alien invasion.  The USP of these extra-terrestrial nasties is that, rather than saucering over cities and blasting us from the air, they land their crafts in Earth’s Oceans and conduct a slow invasion  from the world’s deepest underwater trenches.

Wyndham crafts his alien invaders with a set of narrative proclivities that are more in keeping with horror fiction than traditional sci-fi.  The aliens themselves, for example, are never actually seen, either by character or reader; – they always function off-stage, as it were.  They begin their take-over of Earth by pulling ships into the oceans, making any travel by boat untenable; later there are some suggestions of living tank-like weapons crawling up beaches, and finally, over several years, the sea-levels rise to apocalyptic heights and it looks like lights out for the human race.

That a lot of violence occurs without a single physical description the aliens is what makes them seem alien in the first place.  The ardent lack of description and the glacial pace of the aliens’ progress allow the reader’s imagination to run riot with speculation over what these things look like.  This lack of any specificity whatsoever creates the uncanny impression that these non-visual invaders are simply too alien and too horrific to be adequately described with language.  Wyndham’s rejection of the standard anthropomorphised extra-terrestrial is markedly refreshing, and it’s the latent inability of the cast to truly know their enemy that’s responsible for the horror-fiction vibe that dominates this book’s tone.

But unfortunately, little else about The Kraken Wakes is as successful as its alien invaders.  There are significant pacing problems, to the extent that I began to wonder whether Wyndham was deliberately dragging his feet with story progression in some kind of postmodern narrative reflection of the grass-growingly slow invasion of his alien antagonists.  Frequently 50 pages will pass without anything actually happening; the characters merely spend their time rushing around England asking if anybody knows what the hell is going on (in this regard, I suppose they echo my own sentiments).  Similarly, much of the book’s language is dull and clunky – often leaden with unhelpful adjectives and long, long passages of extraneous, journalistic musings about the international response to the invasion. Such chapters are frustrating because much of the book’s scientific terminology is now obsolete; I often found myself reaching for the dictionary to look-up some esoteric phrase or other, only to discover that it is no longer in use: ‘coelenterate’ being the most commonly used of such out-dated nomenclature (in case you’re wondering: it describes a kind of jellyfish-like tentacle).

As far as I can tell, the most frequent modern criticism levelled at The Kraken Wakes is that it’s very much a product of its time, and hasn’t aged well.  Large chunks of the book reflect contemporary societal fears that’re just no longer applicable.  The Americans initially refuse to believe in the alien invaders, choosing instead to apportion blame to some new and secret Soviet weaponry.  Likewise the Russians accuse the Brits of sinking their ships, and vice versa.  I don’t entirely agree that this Cold War slant alienates a modern readership, because all a reader needs to do is replace every reference to ‘Soviets’ with the word ‘terrorists’, and this should do a more than adequate job of contextualising the Cold War climate of fear and suspicion for 21st Century readers.  Besides, I don’t think that a book being a ‘product of its time’ is any kind of valid criticism at all.

Elsewhere characterisation is problematic, and somewhat of a double-edged sword.  Protagonists Mike and Phyllis have the least believable marriage I’ve encountered in a long while, and speak to each other in a kind of faux Fleet Street insipidity that bathetically undermines any attempts Wyndham makes at presenting the couple’s supposed love and affection.  They’re entirely without depth, and function purely as vehicles for telling the story – they may have worked better as colleagues, rather than lovers.  A major contributing factor to their roboticism can be ascertained fairly early in the novel:  they lose their newborn baby – an undeniably tragic event that is, bafflingly, never mentioned again; as if this could be shrugged off in favour of yet more tedious investigative journalism. Their banality as main characters has the inopportune side-effect of making the seldom seen supporting cast that much more interesting.  The eccentric appeal of mad scientist Dr Bocker (spookily always one step ahead of the aliens) and comic relief of nosy, opinionated neighbour Petunia only highlights the prosaicism of the leads, and left me longing for the rare appearances of the book’s secondary characters.

My final gripe is with The Kraken Wakes’ ending.  Consider yourself duly spoiler-warned.  Mike and Phyllis have fled to the countryside; most of the world’s land is now hundreds of feet underwater; most of the world’s population has drowned.  It’s summer, early evening, they’re looking out over the indescribably vast ocean that covers the planet, only a few islands of land (former mountain ranges) remain, and the narrative tone is one of unknowability and question: who are these aliens? How/why have they flooded the Earth?   It’s beautifully vague, ambiguous and heart-rending.  Then we get to the final page.  I’m not going to quote it all, so here’s a recreation (highly accurate, I promise):

“Hi Mike, you don’t know me, but I have good news. We’ve found a way to kill the aliens.”

Darling, that was a strange man outside.  He says we have a weapon to beat the aliens”

[The phrase ‘ultra-something’ is a direct quote].  The picture of an endless ocean drawn immediately before this conversation is so beautiful, well described and evocative that I was preparing myself to forgive the book’s myriad failings in light of a brilliant denouement; but the dues ex machina undermines the poignancy in an almost comically bizarre come-down that’s entirely out of sorts with both the established pace of the story and the emotional tone of the scene.  The Kraken Wakes is an ambitious but unsuccessful attempt at giving the alien invasion trope an unusual twist.  The focus on the media reaction to such an event is great; likewise the exploration of international suspicions and fear-mongering is convincing.  I also enjoyed the horrific presentation of a truly other, unknowable alien life form.  But poor characterisation, pacing and a frankly stupid ending ruined the whole experience for me.  The Kraken Wakes is slow and boring, and although I’ve been told that this is a minor blip in an otherwise illustrious sci-fi career (Wyndham wrote the universally praised Day of the Triffids and The Midwich Cuckoos), I think it’ll be a while before I pick up another of his books.