Typically I’d have little patience for yet another lyrical story about a tragedy-beset nuclear family told via a patchwork of clever literary references, which is just so voguish right now as to be basically Literary Fiction concentrated, bottled and sold.

But Grief is the Thing with Feathers has a stylistic quality that held my attention. It’s a sort of prose-poetry mash-up about a crow that comes to live with a grieving Ted Hughes scholar and his two young sons following the death of his wife/their mother. 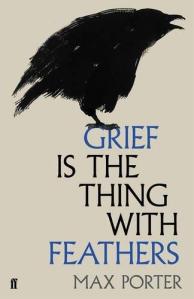 There’s very little in the way of plot. Dad, ‘The Boys’ and Crow are all point-of-view characters, with each of the book’s page-long chapters comprising a kind of vignette or sketch. Some might detail how the family copes with everyday life as grief impinges on routine, other chapters might be purely abstract: emotional tone poems that evoke a sense of time or a feeling, rather than any specific action. Consistently the ‘Dad’ and ‘Boys’ chapters are very sad, characterised by minimalist imagery and eloquent emotional insights. The ‘Crow’ chapters, by comparison, offer hysterical chaos; a successful tragi-comic juxtaposition to the pathos-laden core of the novel’s subject.

This juxtaposition, in fact, is the best part of the book; the sadness and the hilarity simultaneously both undercut and elevate one another, which successfully stops the humour from becoming farce, and the grief from becoming melodrama. The Crow’s language, for example, is so very present: all movement and feathers and noise, which somehow makes the ‘Dad’ chapters even more poignant for their lack of such action. The primary stylistic trait of the ‘Dad’ sequences is an absence of any narrative act whatsoever, grief as the loss of action, “We will never fight again, our lovely, quick arguments”, which absence, of course, is made all the sharper by the Crow’s energy and frisky coarseness.

It’s a shame, then, that so many critics have been quick to label the ‘Crow’ character as purely allegorical, disregarding its material presence as a physical object within the narrative, “blah blah blah metaphor for the family’s grief blah blah” etc. and etc. I can’t help but feel that disregarding the Crow’s physicality lessens the character’s power as a material juxtaposition to the wife’s absence. Reading the Crow as purely figurative weakens the emotive power of the contrast. Perhaps so many critics do this because the book’s title very bluntly (and misleadingly?) announces the Crow as a metaphor? Or perhaps it’s just symptomatic of literary criticism’s current penchant for hyper-realism. Or maybe people just need to read more SFF, in which the presence of such things is taken at face value, allowing us readers to get on with the more interesting business of dissecting how a text actually functions.

The Crow itself is a sort of convergence of various literary traditions and corvid mythologies. The blackness, the crow as metaphor for grief/death etc. is all given the lofty significance you’d expect, but ‘The Crow’ is also Ted Hughes’ Crow, with many of the book’s chapters structurally echoing the poems in Hughes’ famous collection.

I was struck by this sequence, in which Dad’s grief is impinging on his work (in this case, obstructing his thought process as he compiles a chapter list for his next book):

Ch. 2. Reign of Silence I miss my wife

(Grief is the Thing with Feathers p.42)

which reminds me of the catechism-like architecture of Hughes’ poem ‘Examination at the Womb-Door’, where instead of ‘I miss my wife’, the interruption (from the Crow) is always the word “Death”, the relevance of which, here, should be obvious:

Who is stronger than hope? Death

Who is stronger than the will? Death

In fact, many of the book’s chapters could be deracinated from the text and isolated as entirely self-contained poems. Even when the writing is at its most prose-like, Max Porter will employ such poetic techniques as internal rhyme (“Yes, she said, before she was dead”), triple-footed metre (“Once upon a time there was a king who had two sons”), and irregular capitalisation. Lineation is also important here, with lines either running-on, or abruptly terminating in ways which hammer-home points, leave questions hanging, or deliberately interrupt the flow in emotionally significant ways. In a further effort to control the beat of the reading, the text will occasionally look

,which publishers still seem to think is deeply experimental, but which mostly amuses me because it has the potential to fuck with the layout of e-books…

(As a final note, I’ve recently read Cheryl Strayed’s autobiography Wild, which – also about the death of a mother – has a chapter called ‘Corvidology’ in which Crows are described with regards to grief and their being “a symbol of the void”.  I thought this mother/crow dualism between the two books was a nicely serendipitous thing, and isn’t it strange how our reading sometimes coalesces around certain symbols, inadvertently?).