Okay so this is cool.

My friend Carly who works for the San Francisco Ballet (hey, don’t look at me like that – I have cultured friends!), is putting together a characteristically creative and somewhat avant-garde promotional campaign for the up-coming ballet Onegin.  It (the promotion) entails a tumblr feed composed entirely of love letters submitted anonymously by members of the public taking the subject ‘letter to my first love’.  The onus isn’t on the reproduction of actual letters, however, it’s more like: ‘if you could write a letter to your first love, what would you say?’ 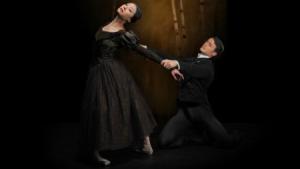 You can find the promotion here (SFballet.tumblr.com), and while some of the submissions are inevitably a bit cringeworthy and naff, many others are very sweet, even moving.  Several of the letters lean heavily to the comedic (one in particular I find very funny), but more-often-than-not the tone is of clearly genuine feeling and sentiment. I’m man enough to admit that the general standard of writing is much, much higher than I initially anticipated, and some of the letters scan almost like prose poetry, unafraid to leave behind the expected propensity for romanticism and explore, instead, such heavy themes as death, regret and the pathos of chronic lonliness.  It’s powerful stuff.

It’d be great if you could head over there and take a look at the letters people have written, and even better if you submit your own (letters addressed to inanimate objects, songs, T.V. characters, long departed pets or that issue of Sonic the Comic no.1 your Mum unwittingly binned while you were at school that one time (…) are also acceptable (remember, it’s all anonymous)).  Carly’s championed my blog for ages (ardent readers of Tomcat in the Red Room (…if such people exist…ahem…) might remember a review of The Easter Parade Carly was kind enough to write for me last year) –so I’d love for Red Room readers to return the favour by whipping up some support for this.  I can’t offer much incentive other than a guarantee that you’ll be contributing to something genuinely worthwhile – think of it as crowdsourced poetry; very twenty-o-twelve.