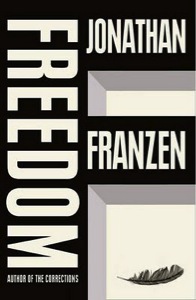 I wanted to hate Freedom.  Seriously: I hoped it would suck.  This isn’t because I harbour any particular dislike of Jonathan Franzen or his oeuvre, but because the critical landscape that surrounds this novel irritates me to a point of near eye-gouging distraction.  Even months before the book was published it seemed that the literary (and especially US) press had already made up their minds: it was going to be extraordinary.  Perhaps its nine-year gestation period following the phenomenal success of The Corrections was partly responsible for the hype; after all, if he’s spending this long writing it then it must be good, right? Right?  And from the instant of its publication it was superlatives-are-go for the American press, and such hyperbolic terminology as ‘greatest’, ‘cleverest’ and ‘coolest’ festooned the headlines of the book review pages.  I’m pretty sure I read a ‘bestest’ somewhere too…

But you’ve gotta feel a little sorry for American literary journos.  They’re so desperate to discover the fabled Great American Novel™, and Jonathan Franzen really was their prime candidate; who can blame them for their brash pre-emptive optimism?  That the G.A.N™ is a nebulous and illusory concept is beside the point: they knew Freedom would be big, and treated it accordingly.  The kudos for having called it out as genius before they’d read it was worth the risk of embarrassment should the book have been monumentally shit.  Not that the Brit media was any less hysterical:  Franzen even graced the front page of The Times when his iconic glasses were swiped at a London signing.  Elsewhere, Jonathan Jones of The Guardian moronically described Freedom as a “self evident classic” (???) and “the best novel of the century”; whether he means the one just started or the one that ended before the book was published is unclear, either way, his fatuous assertion doesn’t hold up to any kind of scrutiny.

Why does this kind of one-sided critical extremism irritate me so?  I don’t know; maybe it’s a latent primordial response to run from anything that’s shoved so forcefully in my face; or maybe it’s because, at heart, I’m still a petulant and reactionary teenager who hates the thought of reading a book that everybody else is reading (the latter being most likely, methinks).  I’m also uncomfortable with the press’ notion that a white, middle-middle class, uber liberal narrative is representative of the quintessential American experience.  Whatever the reason, the immense Freedom hullaballoo irked me something fierce, and I thought: wouldn’t it be hilarious if the book was rubbish?

Well, imagine my disappointment when, about 50 pages in, I found myself really enjoying Freedom…

It’s not the greatest book I’ve ever read, far from it.  And it doesn’t live up to the hype (but then, nothing ever could) – it is, however, darn good; and even if Franzen’s hyperrealistic, middle-brow mulch isn’t your particular brand of literary tote bag (to be honest, it’s not really mine), you should still read it because it’s moving, well-written and has things to say.  To sum it up briefly, I’d describe Freedom as a family saga -cum- state of the nation epic.  A ‘slice of life’ novel.  The crux of the book is a love triangle between Walter Berglund – a man who suffers from perennial nice-guys-finish-last syndrome-, his wife Patty and their friend Richard Katz; a rakish, womanising and mildly successful rock star whose moral discomfort with commercial success, and whose emotional conflict between his promiscuous tendencies on the one hand and his genuine love for Patty on the other make him by far the most interesting character.

Stylistically the book was a letdown, and Franzen isn’t the “extraordinary stylist” that Ron Charles so famously asserted.  Long, compound-complex sentences are the name of the game; and while the prose is incredibly internal, psychological and moving, stylish isn’t quite the word I’d use to describe it.  This is especially true for the ‘book within a book’ (a cliché of modern literature if ever there was one), which takes the form of Patty’s supposed autobiography.  Irritatingly, Patty writes exactly like… Jonathan Franzen, and the complete lack of any tonal shift or change of register came as a massive disappointment.  Nope, style isn’t this book’s great forte, but what it lacks in panache it makes up for in content.

The majority of the narrative is driven by a kind of amorous bleep-test that sees Patty running a constant back-and-forth between her two lovers; no sooner arriving at one than she turns towards the other.  Yet Patty’s designs on unfaithfulness become the ultimate source of her own sexual frustration.  Walter is too meek and submissive to assert his supposed right as husband to her sexual fidelity (which is what she most wants from him – to care), but Richard is too strong-minded and morally driven to ever betray the trust of his best friend by indulging his passions for Patty.  Thus Patty finds herself trapped in a sexual limbo – her husband’s lack of passion grants her a kind of freedom by neglect (albeit a morally dubious one), but it’s a freedom that she is unable to express; her desires for Richard being stonewalled by his loyalty to Walter.  Incongruously, the strongest relationship in the book is between Walter and Richard, and it’s jealousy at this impenetrable homosocial bond that becomes the significant cause of Patty’s inevitable (even predictable?) breakdown.

But such situations don’t stay tidally locked forever, and after a long build-up the proverbial really hits the fan at about two-thirds of the way through the book.  Mistakes are made, relationships ruined, families torn asunder, and all the usual yadda yadda of emotional fallout ensues.  In fact, the final 150 pages or so really are the best.  It’s here that Franzen addresses the problems, pains and fears of change, and where seemingly minor actions: sex, a phone call, writing a song or taking a political stance all have major, life-changing resonances.  I’ve never encountered a book in which perspectives, desires and loyalties shift so much, and in which change becomes a transcendental force, not only expressed in the personal/sexual lives of the protagonists, but in society (as depicted by Franzen) as a whole.

Walter is a passionate conservationist; in fact, large chunks of the book have a very left-wing, in-your-face anti-corporate agenda (mostly expressed by a malcontent mouthpiece character (oh so subtly called ‘Jonathan’)) and despite Walter’s pronounced hatred for economic greed and the evils it inspires, we eventually find him forming an unusual alliance with an open-face mining corporation, an agreement which sees both sides benefit but which, undoubtedly, would have horrified the younger incarnations of Walter.  Similarly, Patty’s white-picket-suburban-soccer-mom fantasies are perpetually frustrated by the idiosyncrasies of modern American society: recession, underage sex, neighbourhood feuds and ever-present spectres of drug and alcohol addiction.  Her eventual epiphany is one of the novel’s primary messages: things can’t stay the same.  Patty’s vision of the perfect family life isn’t thwarted by any action of her own, but by the realisation that the 1960’s suburban ideal just doesn’t exist anymore.

It’s a supreme irony that the book many hoped would become the Great American Novel™ is actually the book that sticks a middle finger up to the whole G.A.N™ misnomer.  Instead of capturing the quintessential American social and literary experience, Freedom exposes a country that is very much a frontier nation: in a state of perpetual flux, impossible to pin down and ever-changing.  From hard rock stars that turn into placid folk icons (Richard), to intense love that descends into the purest hatred, to much broader political shifts and the mellowing of once hard-line ideologies, Freedom is characterised by a kind of mutability, the expression of which is probably best found in one of the book’s most striking if simplistic plot threads: nobody here wants to become their parents.

The struggle against history (familial and political) and the desire to escape the path laid before them is the cast of Freedom’s most noble and defining endeavour.  The ways in which Jonathan Franzen manipulates this familial microcosm to echo and reflect broader American concerns is the book’s greatest achievement.  In doing this, Franzen exposes the major flaw in the concept of the Great American Novel™: America can’t be defined; at least, not yet.  Freedom isn’t perfect, and if anything the constant references to War & Peace are proof that even Franzen thinks a little too highly of himself.  It is, however, very good, and in denying the critics what they most wanted, Franzen describes a new way of representing Americana.