Update: This review has recently enjoyed an unprecedented amount of traffic – largely instigated by the Tweets of some Australian literary commentators who seem to have stumbled upon my blog.  While this is great – flattering and highly welcome – I am perturbed by the amount of non-critical, offensive and juvenile remarks that a handful of new readers have attempted to post in the ‘comments’ section beneath this article. This has extended to abusive messages sent to me on facebook, and, somehow, my personal e-mail address.

I welcome comments that engage with my review (either positively or negatively) on a critical level – but I will not ‘approve’ those that are needlessly vitriolic, profane or racist – this means that such observations that I am (and I quote); a “pommy ignoramus”[Ian Syson], “fucking English cunt”[BeWest2], “stuck-up Pom dick”[Tom Shepherd] etc. will not be approved, and hence never go live into this article’s comments stream.  There’s a difference between comic banter/tongue-in-cheek humour (which I welcome), and out-and-out abuse.  Comments such as these disgrace any hand that writes them, and have no place in my blog. Furthermore, they reflect very unfortunately on the type of readers who have recently found my website via this new debate.  In short: I want my blog to be a polite space.  It may be de rigueur  to be rude and cruel on the internet – but that doesn’t mean I have to put up with it on my blog.

Finally, the contention that my argument is invalidated because I don’t live in Melbourne is fundamentally dunderheaded and somewhat of a logical fallacy, and deep down I think the people making such comments know this. I firmly believe that literature is, at best, very problematically related to the real world, and I shall continue to review writing set in places and times of which I have no first-hand experience – and I stand by this review.

Many thanks for reading, 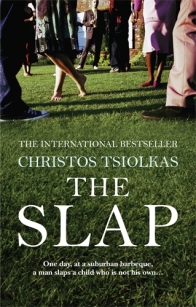 If Christos Tsiolkas wanted to name his novel after its most prominent moment or topic, then he should have called it ‘unpleasant people having repetitive, unpleasant sex’ rather than The Slap.  The novel’s titular event is barely a footnote to the plot, and Tsiolkas seems morally afraid to engage with the issue on any significant plane: The Slap is neither emotionally nor intellectually demanding, and offers no insight into the ethical conundrum posed by its blurb.

At a BBQ in Melbourne, Australia, a four-year-old boy named Hugo is acting every bit the insufferable, entitled, disruptive and unpleasant infant his parents have brought him up to be.  In an effort to calm the rowdy and precocious boy, a man who isn’t his father slaps him in front of the entire gathering.

The domestic corporal punishment of children is a contentious issue; even more so when the chastisement is delivered by a non-parent.  In some countries (not Australia) it’s completely illegal, and in most parts of the world the concept is associated with a niche of old-fashioned parenting, perhaps synonymous with the traditionalist right.

Hitting children has also received an unprecedented amount of media attention in recent years; it’s an issue about which everybody has an opinion – even if you’ve not been a parent, then you’ve been a child – making it perfect fodder for the popular novel.  Perhaps this universal interest accounts for the novel’s ridiculous sales record; it’s currently the best-selling book of the 2010 Booker Prize longlist and, according to some sources, it’s sold a staggering 5000% more copies than its closest competitor, Room by Emma Donoghue. These sales figures can probably be attributed to the book’s provocative subject matter; but if you were feeling particularly cynical, you could argue that The Slap has sold so well because it’s the only paperback on the Booker longlist.

The narrative is divided into eight very long chapters, each told from the perspective of a different witness to the slap.  The first thing I noticed was the ethnic and cultural diversity of the cast of characters at this neighbourhood barbecue.  The entire social rainbow is represented in The Slap, and the novel’s dramatis personae reads like the fantasy guest-list of an equal opportunities officer: there’s an Indian-Australian, Greek-Australian, Aboriginal-Australian, naturalized white Australians, a black Muslim, a Catholic, a Hindi and an atheist; young, old, gay, straight, single, married and divorced; with careers ranging from the unemployed to car mechanics, doctors, vets, writers, actors, waitresses, shop-keepers and carpenters.  I’m not saying that such a sundry group of tight-knit friends doesn’t or couldn’t exist (if anything, I admit that ‘realism’ is an elastic and ambivalent critical term), but the cast’s opportune diversity seems to me a cover-all-bases ‘checklist’, dare I say a one-of-every-kind approach which is, frankly, a tad patronising, too convenient and smacks of misguided political correctness.

Concordantly, the social and economic diversity of the characters exposes Tsiolkas’ laziness as a writer; he resorts to the most basic exploitation of social conflicts in order to create dramatic tension.  It’s indolent, lacks depth and is border-line offensive in its reductiveness.

However, despite their differing cultural heritages, the characters in The Slap all share the same, uniform personality.  It’s a psychological homunculus applied to every single protagonist.  They are all (without exception); adulterous, quick to anger, violent, vain, profane, selfish and judgemental.  The eight characters that the novel follows may as well all be the same person.  Unfortunately, the characters aren’t even presented as anti-heroes, nor are they unpleasant in an appealing or curiously attractive way; they’re just horrible, horrible people, and I thank God that Tsiolkas’ vision of society isn’t at all close to reality.

Supposedly, each chapter gives us a different viewpoint on the slapping of Hugo.  I was hoping that, as the novel progressed, a complex discourse would develop; one that analyses the various moral and social implications of hitting children.  But in truth, Tsiolkas has absolutely nothing to say on the matter; nothing in The Slap is enlightening, contentious, creative or insightful.  The fall-out from the titular event lasts no more than fifty pages, and the writer doesn’t contribute anything of interest to the debate.  Only the two simplest of viewpoints are implicit in the narrative, and these the most garishly polar of the debate: ‘The kid deserved it’ versus ‘nobody should hit a child’.  What’s more frustrating is that Tsiolkas refuses to express any kind of authorial opinion – lest he alienate a certain percentage of his potential readership, I imagine.  The book is reluctant to fall down on either side of the child-slapping debate and thus lacks any argument or imperative whatsoever.

The prose can be defined by two stylistic idiosyncrasies: firstly, there’s a constant use of expletives and secondly, an obsession with gratuitous sex.  The word ‘cunt’ takes centre stage, but is given a run for its money by the equally expressive ‘fuck’ and ‘shit’. I wish I could say it was witty or shocking, but the language is merely tedious in its verbose repetition.  Some readers may find this use of language trendy or in-your-face or ‘grungy’ – but I found it boring and inexpressive.  It channels Bret Easton Ellis or Chuck Palahniuk, but without those writers’ nuance, wit or depth of social commentary.  Every page of the book drips with profanity rather than insight; it seems that Tsiolkas can only articulate his characters’ emotions with expletives, from happiness to sadness – everything is described in four-letter words and every character espouses the exact same narrative voice.  To say the novel suffers from a lack of linguistic breadth would be an understatement. Maybe this is how the average Australian speaks (which I doubt), but after 500 pages of it, I just had to let the pointlessly crude language wash over me, meaninglessly and without affect – surely this is not a good thing?

Generally speaking, I dislike sex scenes in novels; unless they develop a plot, comment on themes or are in some way vital to character development, then I find them irrelevant.  The language and imagery used to evoke sex in The Slap is cliché-riddled, ineloquent and unintentionally farcical.  I don’t want to see the characters having sex for the same reasons that I don’t want to see Elizabeth Bennet slowly eating breakfast, or Jack Bauer voiding his bowels – it tells me nothing, it means nothing; I feel nothing.

Parts of the novel are also frustratingly difficult to read.  There’s a frequent confusion of pronouns and their referents, which rather than seeming a stylistic choice, just ring of irritating grammar mistakes.  While I could forgive such a misguided constructions if they were one-offs, this type of grammatical error is alarmingly common-place.  Similarly, the second half of the novel is riddled with typing and page-setting errors.  Take the following three examples:

It’s as if Tsiolkas’ editors got bored half-way through the book (who can blame them?), and decided to give up.  I find such a proliferation of typos in a printed novel to be utterly inexcusable and a detriment to the veracity of the medium.

The Slap is a complete failure; a book that promises so much, but delivers so little.  Supposedly, it’s a heated and controversial novel about a much-debated moral issue; in reality, The Slap makes no contribution to the child-slapping discussion.  It offers no original insights or ethical commentary, and doesn’t even do a good job of couching the debate in terms of its pros and cons.  The actual event, ‘the slapping’, is over in an instant, and is soon forgotten in favour of long, gratuitous sex scenes and uninteresting personal disputes.  Hitting children is a hot topic, it should be easy to write well about; but Tsiolkas just makes such a horrible mess of everything.  I’m sure that the novel’s ostensible subject matter will make it popular with a certain type of coffee-morning book group; but I’m also confident that, like me, most readers will be disappointed by the novel’s refusal to engage with the issue at hand (pun intended).

I cannot fathom why the Booker Prize judges saw fit to nominate this novel to their longlist.  Don’t read it.  And if you happen to see Christos Tsiolkas walking down the street, feel free to give him your own coy slap across the face.  It might knock some sense into him.