I like to think that there’s a sort of spectrum of expositional praxis available to authors who want to create (science)-fictional settings so estranged from everyday life that they require a shitload of explaining if they’re to make any sense whatsoever. On one end of the spectrum you’d find the ‘information dump’ method, which I guess has the merit of getting the heavy, boring, background clarification stuff out of the way as quickly as possible, and is charming in its own no-nonsense manner; but that’s about the limit of its appeal as a stylistic or narrative technique (I’m looking at you Arthur C. Clarke). The opposite end of the spectrum would be a kinda Miévillian refusal to provide any helpful context or perspective of any kind, and instead expect the reader to orientate herself by decoding subtly deployed clues as to  the nature of the fictional world a la The City and The City (c.f. also: M. John Harrison, Michael Cisco etc.). The latter is definitely my preferred delivery method, but I get that it’s a significantly harder sell than the former, requiring as it does some vested input (/work?) from the reader, and a higher level of technical ability from the writer.

Christopher Priest’s Inverted World occupies an expositional space half-way between these two extremes;  it casts an adolescent ingénue as its protagonist, and proceeds to guide him (and by proxy the reader) through the weird post-apocalyptic wilderness of the book’s setting via a continuous slow-reveal of facts that doesn’t let up until the novel’s infamous mind-fucky dénouement. But while this expositional praxis avoids the awkward “As you know, Geoff…” explanations of the ‘info dump’ method, it isn’t without its difficulties, namely: Christopher Priest has to contrive a reason why the hero should reach his 18th (or whatever) birthday without having learnt anything about the world in which he lives. Happily Priest manages this in a way that’s not just congruous with the book’s setting, but darn near essential to the both the immediate narrative and it’s subtextual concerns for perception, protest and the way we handle the evidence for the world around us. Given the nature of the book’s setting, and the slow but constant bleed-out of major plot revelations, it’s almost impossible to discuss Inverted World without recourse to at least a few spoilers, so consider yourself duly warned…

As its title implies, Inverted World is set in a kind of opposite-universe: an infinite world in a finite space. Which is to say, the planet on which the book is set stretches forever; it’s not a globe, but a never-ending hyperboloid. The action transpires on the last human city of “Earth”, as it is winched slowly forward on rails (which are taken up from behind the city and re-laid ahead of it) in order to avoid a crushing gravity field that’s eternally moving forward a few miles in the city’s wake.  It’s difficult to overstate the influence of this idea, and indeed you might recognise the ‘ever-moving-city-on-rails’ trope (I can’t think of a better name…) from the giant Cathedral trains of Alastair Reynolds’ Absolution Gap, or the titular train city of China Miéville’s Iron Council. (And isn’t it awesome to encounter the sparking genesis of a now commonplace SF trope? At least, I can’t think of any direct predecessors to Inverted World…) Most of “Earth”’s inhabitants don’t know that the city moves, or anything about the world that surrounds them: they are raised within the city’s walls, never allowed to leave, fed on synthetic foodstuffs and are generally kept as unwitting thralls to the city’s directorate. Only specially privileged “Guildsmen” (who travel outside the city to help move it, or to map the forward terrain etc.) are privy to the truth, and are oath-bound to keep it a secret. 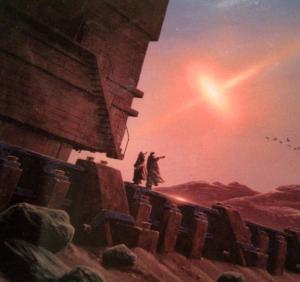 The narrative follows new Guild initiate Helward Mann (I know, I know… I laughed too, but I promise the twee-ness off this wears off with time; much like with “Batman”, or “Superman”, you kind of get used to the weird silliness of the name), who, as the novel’s opening tells us, has “reached the age of six hundred and fifty miles” (I challenge you to find a more immediately estranging first sentence).  Having come of age, Helward takes various oaths, learns about the city’s founder, Destaine, and gets hitched.

The first half of the novel is essentially an extended description of how a massive city can be moved in the first place. There’s an initial charm to be found in the seriousness with which Priest treats this idea, but as the novel delves deeper into the mechanics of city moving, I became genuinely impressed with the depictions of scale, hard labour and the pyramid-building magnitude of such an endeavour; the dirty, sweaty, ironclad reality of which offers a nice visual and thematic contrast to the somewhat dry opening passages of solemn oath-taking, governmental procedure and explanations of familial privilege.

Interspersed between these long descriptions of engineering are chapters with a tighter, more human focus: Helward’s relationship with his new wife, Elizabeth, and his internal struggle with – on the one hand – her demands for openness and whole truths, and – on the other – his commitment to his Guildsman vows of secrecy. These smaller, quieter scenes offer a nice counterpoint to the high Science Fiction of the city-moving stuff, and make for impressive proofs of Christopher Priests’ writing chops; he’s equally as comfortable with the most demanding of the genre’s fantastic tenets as he is with the most intimate study of human relationships. My fear that the kitchen-sink drama of Helward’s marriage was nothing but filler to break up the descriptive monotone of the engineering chapters was proven unfounded, too; as such intensely personal scenes of marital difficulty function as both microcosm and set-up for the novel’s prominent crisis: a schism and rebellion within the city.

When the inhabitants discover that their leaders have been withholding the truth, they inevitably become restive, demanding that the city stop moving, that they stop exploiting the local tribes people, and that the population settles in a permanent site: they refuse to believe that the city will be destroyed if they stop moving forward. This is exacerbated by the arrival of some outsiders who see the world very, very differently. Cue lots of dispute, civil unrest and threats of sabotage. But while we’re treated to some interesting and lengthy debates, it’s a shame there isn’t more visceral description of the protests that wrack the city; we’re mostly forced to settle for second-hand reports and hearsay, with the majority of the disorder happening off-stage, as it were.

For left-wing readers like me, it’s tempting to deconstruct Inverted World in terms of economic structures and modes of production. The moving city is a definite metaphor for late-stage capitalism: devouring all resources in its path at the behest of a small minority of privileged elite who propagate a politics of fear that keeps the workers loyal, industrious and unambitious despite their subsistence-level living conditions. Likewise the plundering of the land and exploitation of the surrounding tribes definitely rings of the colonial. The civil unrest that occurs when the workers of the city are finally educated about their true condition is an explicit class struggle, and the threats from the ruling Guildsman that the city “will be destroyed” if things change reflect Capitalism’s disdain for any narrative that differs from its own self-imposed and self-serving world-view.

But what of that crushing gravity field that pursues the city? Well, this too becomes a metaphor of sorts; not for any existential or physical threat, but for the realpolitik of capitalist narrative. By which I mean the capitalist assertion (lie) that society has to function this way, or surrender itself to a terrible alternative. It becomes a matter of perception: it’s obvious that the ruling Guildsmen genuinely believe in the crushing gravity wake, so much so that they are unwilling to test it, challenge it or entertain the notion of an alternative explanation. Just as, say, the bankers in our world insist that their way of handling the economy is the only way that works. Conveniently, though, this rigid belief that this is the way things are is what enables the Guildsmen to maintain their control in the first place. They refuse to entertain the notion of an alternative way of seeing the world. The city, therefore, becomes itself a mode of production; the movement of which is the industrial process by which the ruling Guilds implement their will to power.

So while stopping the city may not actually be dangerous in any material sense, it’s dangerous because it would free the workers from the grind that keeps them down, and challenge the Guilds’ political hegemony.  The Guildsmen are unwilling to accept any alternative narrative to the “crushing gravity field” because to do so would neuter the fear with which they shackle the people and keep themselves in power.

Similarly, the moving city – trundling along in its never-ending straight line – and the infinite world ahead of it, function as allegory for the so-called ‘End of History’: a 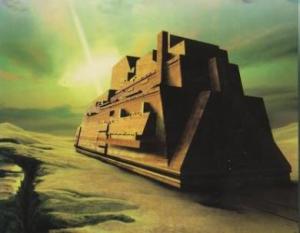 kind of capitalist end-game: the point at which social, cultural and economic progress halts, and society stagnates and just rattles on in the same way, forever. It’s at this point that we become aware of Inverted World’s greatest irony: the city – so long a literary metaphor for movement, bustle, energy and ambition – is turned by Priest into a metaphor for stasis; the most striking of the title’s many suggested inversions. Indeed, a real movement would be to stop the city; freeing its citizens from the back-breaking labour of moving the thing, and instigating instead an opportunity for social change. Perpetual movement is the same as inertia.

Inverted World, then, functions as a warning against the single-minded and unthinking acceptance of the narratives imposed on us by our masters. The tragedy of the book lies in the protagonist’s socially-encoded refusal to look at the world from a different perspective. It’s essentially an appearance vs. reality paradox: a classic mode of Science Fiction, here re-figured into possibly the strangest and most original planet I’ve ever encountered.