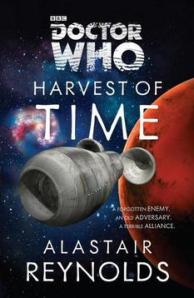 In many ways Doctor Who is perfect fodder for Alastair Reynolds.  Just as time and memory are the major thematic preoccupations of the T.V show, so too have they become significant subjects of Reynolds’ recent work; most recently Blue Remembered Earth is an unusual SF novel written in the literary mode of the Family Saga, in which two siblings have to come to terms with the painful fact that their family’s history isn’t what they thought it was.

As its name suggests, Harvest of Time continues this examination of time and memory, albeit in a more light-hearted and playful way than Reynolds’ most recent novels. The book features the third incarnation of the Doctor (played in the show by Jon Pertwee), exiled on Earth in the early 1970’s (so, in essence, it’s the reader who’s travelling back in time). The Doctor teams up with the quasi-military organisation UNIT to investigate the unlikely collapse of a North Sea oil rig; an event that’s soon revealed to be a precursor to a massive alien invasion unwittingly instigated by the actions of long-time Doctor Who villain The Master. Much of the book is recognisably Reynoldsian (if nobody’s coined that term yet, I’m doing so now…); there’s a country-sized space ship that stands as a testament to his fondness for massive scale, the narrative action hinges on the unforeseen and tragic consequences of decisions the characters made in their distant pasts, and the book ends with an absolutely brilliant mind-fuck revelation that generates the kind of sense-of-wonder for which Reynolds is best known.

Despite the presence of these familiar tropes of Reynolds’ writing, however, Harvest of Time is very much a Doctor Who story, and the most interesting aspect of the book is the way in which the writer fuses his own narrative style with the tone and sensibilities of the T.V. show.  The sartorial Third Doctor is his recognisable self; calmly authoritative, moral, and very much a scientist (he spends a good portion of the book looking through microscopes and fixing things); but there’s notably less scientific terminology than we might expect from an Alastair Reynolds novel – a concession doubtless made out of consideration for a ‘Whovian’ readership potentially unfamiliar with the tenets of Hard SF.  The Brigadier is also present; a blowhard, gung-ho and right-wing encapsulation of post-war militarism and suspicion of the other, whose blustering interactions with the Doctor are one of the book’s highlights.  Rounding out the regulars is the Doctor’s assistant Jo Grant; she’s more head-strong here than she was in the show, but her inquisitiveness is very effective, and the character really comes into her own during the novel’s second half, when she’s separated from the Doctor and has to take matters into her own hands.

Alastair Reynolds, then, does a great job of capturing the tenor and the atmosphere of classic Doctor Who.  Everything from the characterisation, to the period details, to the little idiosyncrasies of the characters’ relationships feels just right. Even the name of the alien invaders, the “Sild”, sounds like it belongs in the Who universe. The book is also very funny (one particularly memorable sequence involves a stampede of alien-possessed cows), but the humour is always respectful of the source material, and never descends into the campy farce that’s become an unfortunate hallmark of so-called ‘New Who’.

Of course, the advantage of writing for a pre-existing fictional continuity is that all of the groundwork for the lore, character history and technological “rules” of the universe has already been laid in advance.  The fact that Alastair Reynolds doesn’t have to deal with describing any of this stuff gives Harvest of Time an absolutely ferocious sense of momentum.  Where a writer would usually spend pages setting up and developing the world of the novel, Reynolds is free to concentrate on plot, relationships and narrative action. The result is a book that hits the ground running with a strange and intriguing prologue, and doesn’t ever let up from there. The action constantly flits between several groups of characters, and just as the tension feels ready to explode, Reynolds will end a chapter with a micro- cliff-hanger, only to change focus to another group of people in the subsequent pages.  It’s a technique borrowed from thriller fiction, but one that works particularly well here.

To return to the themes of time and memory. As the Sild invasion of Earth progresses and the plight of poor old humanity becomes ever more bleak, the Doctor is forced to team-up with his abiding rival – The Master – in order to put a stop to the alien nasties. The temptation at this point is to make some twee comment about ‘the original odd couple’; and yes, sure, there’s plenty of entertaining banter between the two: but Alastair Reynolds’ chief goal in making the Doctor and the Master work together isn’t to exploit any comedy inherent in the situation; rather, this strange union serves to make some interesting points about the nature of Time Lords, and the premise of the Doctor Who universe in general. The invasion of multiple planets by the Sild (and the subsequent slaughter of millions) only transpires because of actions taken by the Doc and the M in their distant pasts. Harvest of Time examines the consequences of lives that are lived so long, and of changes made to history so monumental, that their repercussions become completely unknowable. There’s a brooding sense of pathos that develops as the Doctor travels millions of years into the future to witness the consequences of his and the Master’s actions. Of course, the Doctor is specially positioned to try to fix the mistakes of the past, but it’s nonetheless true that the darker aspects of Harvest of Time are direct consequences of the quasi-immortality of Time Lords, and their galaxy-spanning meddlings in time and space. 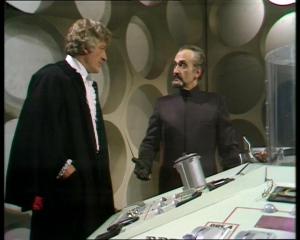 The subtext to this is a suggestion that the Doctor and the Master are more similar than either they (or most fans) would willingly admit. The Master may have more of a handle on the decisions he makes (his basic ideology is self-serving, and to hell with anybody else), whereas the Doctor is often morally conflicted, but the eventual truth is that both characters’ actions change things on such massive scales as to have essentially unpredictable consequences. The moral difference between the Doctor and the Master, therefore, is revealed to be one of intent, and not one of results. I guess this is the ever-present sadness behind the smile(s) of the Doctor: his struggle to do the right thing is pitted against the knowledge that his deeds will have unforeseen effects as they travel into distant time. There’s a slow war of attrition going on between two men in Harvest of Time, but in reality, they’ve never been closer. Jo Grant and Mike Yates and the Brigadier are all here, but the Doctor’s real companion this time around, is the Master.  They’re holding mirrors up to one another, and the resulting infinity of reflections is a fitting mise-en-abyme to illustrate the echoes of their actions travelling to the end of time.

This is all quite extreme material for Doctor Who. Not just time travel, but millions of years’ worth of the stuff. Planets are destroyed, races wiped-out, and there’s a sort-of prison ship that takes millennia to explore (btw, that phallic… thing on the front cover? That isn’t how I visualised any of the book’s spaceships). So perhaps the simplest way of describing Harvest of Time is to say that it’s classic Doctor Who refashioned through the lens of modern Space Opera.

At this point I should note that not all of the book’s cast is familiar, and the most prominent newcomer, Eddie McCrimmon, is a potential contender for the title of most interesting character. She’s an executive in the oil company that bears the brunt of the Sild’s initial invasion; she’s self-determining, occupies a position of power and authority, and has a very moving back-story. Eddie is a convincing rebuttal to the frankly appalling way the T.V. show has handled women in recent years (companions now seem to be groomed from childhood, and they’re consistently made into either shallow love interests, damsels to be rescued, or mere plot devices to be explored). And, in fact, you could probably extrapolate that further to claim that Harvest of Time proves Doctor Who’s enduring potential for brilliance at a time when the live action programme seems to have lost its way (how many episodes have there been in recent years that resolve all their narrative difficulties merely by having the Doctor press some kind of reset button?).

But don’t worry if you’re coming to the book with only a rudimentary understanding of the Who-verse (God knows I’m no kind of Who expert). The book doesn’t pre-suppose a deep knowledge of the programme and its history, and any obscure references are inserted more for the benefit of hardcore fans than in service to the actual plot. Harvest of Time is a wonderful novel; fast-paced, funny, inventive and unafraid to touch on the deeper, more philosophical aspects of Doctor Who. If only the T.V. show was this good.