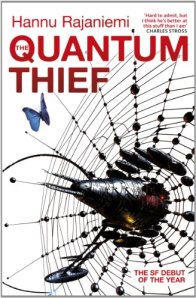 Hannu Rajaniemi’s The Quantum Thief occasionally does this really interesting thing whereby it wilfully undercuts its own hyperbole, often to grand (if a tad saccharine) emotional effect.  The greater part of the book’s aesthetic comprises a kind of rampant over-the-top-ness; it’s very, very far-future SF: every character is a quasi-immortal (don’t ask) posthuman, the action transpires on a walking Martian city, nanotech implants enable instantaneous telepathic communication, everything is surrounded by a data cloud called the ‘exomemory’, and the titular thief himself can manipulate physics to steal quantum time off a person’s life.  The whole thing is wildly inventive and stylistically zappy: an exuberance only matched by the book’s stratospheric levels of pre-publication hype. But after the umpteenth description of planet-sized this and million-year-old that, your reader began to feel justifiably (I think) exhausted by all the cold techno-babble and sense-of-wonder fetishising of big numbers and weird technologies.

I’ve read in numerous places that all of this book’s ideas are scientifically on the money (Rajaniemi has a PhD in quantum or string something-or-other, so it’s fair to say he knows his tachyons from his, er, apples).  And yes, sure, the book can be exhilarating in its wry challenge to the reader to keep up with lots of strange new words (most of which are given no explication whatsoever), and there is something pleasingly hypnotic about being swept up in a relentless stream of terminology (which you can either let wash over you, or spend hours trying to unpick the weird etymologies of); but such things can only carry a novel so far.  As I read The Quantum Thief, I often found myself longing for something recognisably human – emotionally, socially, even politically – amid the salvo of jargon and un-relatable plot twists.  Happily, such moments do pepper the narrative, but always with an accompanying sense of bathos, as Rajaniemi has to deliberately undermine his own stylistic and lexical extravagance in order to make them work, resulting in such narratively interesting passages as:

I scan my fragmented memory for images. An ice castle in Oort, comets and fusion reactors tethered together into a glittering orrery, winged people chasing them. Supra City, where buildings are the size of planets, domes and towers and arcs rising up to meet Saturn’s ring. The Beltworlds and wild synthbio covering them in coral and autumn colours. The guberniya brains of the Inner System, diamond spheres adorned with the faces of the Founders, filled with undeath and intrigue.

The odd thing is that all that feels less real than sitting in the sun with her, pretending to be human and small.

So The Quantum Thief willingly destabilises itself; the stylistic status quo of large-scale imagery and high-level geek speak undercut by emotive language to create a kind of contrast or tension, out of which comes the book’s more successful emotional moments.  It’s an admittedly interesting technique, but to be honest I can’t decide if Rajaniemi’s reliance on such a thing to create tone and feeling is a brilliantly self-aware critique of hard SF genre proclivities, or just a rank failing of his predominant style.

It is, however, unfortunate that such moments are so few and far between, as many of TQT’s descriptive passages are so jargon-filled that I often had no idea what I was supposed to be visualising: a frustration that would undoubtedly have been mitigated by more such bathos as that quoted above.

But what’s it all about? Well, for the record, any statement I make about the book’s plot should be assumed to carry a parenthetic “(I think…)”, as the narrative is so fast-paced, confusing and hinged upon terms that the author refuses to elucidate that now – several days after having finished reading it – I’m still not entirely clear on what happens.  But here goes… Jean le Flambeur is a master thief broken out of jail by a warrior, Meili, who wants Jean to steal something for her.  First, however, they must travel to Mars to steal Jean’s own memories that an older version of himself has hidden away. Meanwhile, also on Mars, Isidore Beautrelet, a gifted young detective, is investigating a conspiracy while guided by a flying law enforcer who dons a top-hat and steel face plate and who goes by the moniker ‘The Gentleman’.  It’s not long, unsurprisingly, before the stories of Jean and Isidore intersect.

In reality, though, this meagre synopsis doesn’t scratch the surface of Rajaniemi’s inventiveness: there’s the ‘gevulot’ system of perception-based privacy, also the armies of ‘Quiets’ – machines inhabited by the consciousnesses of Mars’ dead (before they’re re-born to live again, that is) – and (a personal highlight), Perhonen, Meili’s flirty, vivacious and sarcastic space ship. It would take several review-sized posts just for me to list, verbatim, the myriad SF weirdnesses that comprise TQT, so let’s suffice it to say that Rajaniemi is mindblowingly creative, and his universe impressively consistent within the remit of a narrative framework in which almost anything goes.

Amid all of the unrestrained chaos of such imaginative outpouring, however, TQT is centred upon a fundamentally well-established and familiar character conceit: the gentleman thief versus the detective savant. The fact that the thief has no idea what he’s stealing, and the detective no idea what or who he’s investigating is equal parts amusing and frustrating though, as almost every character has the advantage of the reader in terms of the information available to them.  Equally as frustrating is the fact that the entire cast speaks with the same voice: the book’s dialogue is undoubtedly impressive, a fast-paced, flippant and snarky style that’s predicated on wit and banter-esque exchanges, but it’s let down by its uniformity.  The sharp and oh-so-droll conversation isn’t consistent in its quality, either, occasionally reading like a sub-par Aaron Sorkin or Joss Whedon: all of the snark, but none of the depth: “She knows pop culture references! I’m in love.”

The narrative that surrounds the dialogue, however, is consistently brilliant (if, as I’ve stated, frequently confusing), and manages to combine swift pacing with convincing philosophical asides, flitting comfortably between third and first person perspectives without the pretentiousness that such a gimmick often involves.  I also enjoyed the sly references to the roots of SF; with the thief/detective dual narrative paradigm functioning as a definite call-back to early 20th Century noir magazines, and the Martian horde of rampaging ‘Phoboi’ a nice nod to the mutant alien swarms of hero-centric SF pulp.

Jean le Flambeur himself is equally hit-and-miss in his presentation. His gentlemanly charm and politeness is pleasingly at-odds with his morally dubious profession, and the emotional rawness that comes to the fore as his forgotten past is slowly revealed is well realised. But his irresistible sexual allure and string of in-novel liaisons (even Meili’s space ship falls for him) borders on farcical (and not in a good way); a throw-back to the male adolescent fantasy-fulfilling aspect of pulp SF that I didn’t welcome.

The Quantum Thief, then, is a frustrating book.  The gigantic architectures of Rajaniemi’s imagination are on full display, and many of the book’s ideas are truly original; no mean feat in 21st-century SF. But punctuating the craziness and unfettered creativity are several problems with characterisation, clarity and an obtuseness of language that obstructs the book’s imagery. Where China Miéville or M. John Harrison might employ terminological obscurity as a narrative device to drive momentum, or an aid to a kind of immersive estrangement, TQT is just bafflingly convoluted, alienating, and kinda smug with it. Rajaniemi’s scientific knowledge is impressive, but the refusal to explain the terms of his world doesn’t have the aesthetic panache he seems to think, nor does it carry the depth of reference to be passed-off as somehow modernist. It is a good book: fast paced, highly original, and occasionally undercut by a moving sense of emotional bathos, but every success is counterpointed by a frustration that tempered my whole experience. I’ve never read anything quite like TQT, but I can’t help but feel that it could have been… more…