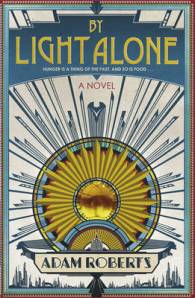 You know zombie movies, yeah?  Zombie movies? Okay so you know how in zombie movies there’s often a protracted period in the opening act during which the characters have no idea that the world has gone to shit and that the zombie horde is almost at their front door, and the only way that the viewer has any idea about the zombies is because she’s given glimpses of subtly-placed newspaper headlines and T.V. footage telling her about the zombies – reportage of which the characters all seem blissfully unaware?  Well, Adam Roberts’ By Light Alone begins in very much the same vein.  There are no zombies, but the world has most definitely gone to shit.  This may be painfully obvious to the reader, but the rich, self-centred protagonists, sealed off in the hermetic paradise of uber-affluent Manhattan, have no idea about the true state of things – reading the news, you see, has become distinctly unfashionable.

I say there are no zombies – but that’s not really true.  By Light Alone is set 100 (ish) years from now, when humans have genetically engineered the ability to photosynthesize through their hair, thus eliminating the need for food.  This results in a kind of extreme Marxian two-class society: the rich (who can afford real food) are completely sealed-off and unreachable, and affect baldness as a visual signifier of their wealth. The poor masses, by comparison, grow long flowing locks and spend their days prostrate in the sun in order to survive. (I suppose the “jobsuckers” (those who work) form a third class – analogous with the petite bourgeoisie – but the novel never deals with these directly.) The so-called ‘longhairs’ are seen by our rich protagonists as the zombie plague: socially worthless (they don’t need food, so there’s no motivation for them to work the low-paid jobs of the poor), nomadic and emaciated, they ring the walled-cities and lay-about on rafts, just existing in their millions, described using imagery highly reminiscent of cinema’s zombie hordes: gorging all day (albeit on sunlight), walking about, and not doing very much of anything else.

In order for By Light Alone to work, then, the reader has to swallow the ridiculousness of photosynthesizing hair, and for what it’s worth I was more than willing to suspend my disbelief in this regard (who says Science Fiction has to be about real science, anyway?).  I was wary going-in to a book that so obviously functions as a thought experiment, a transposition of our real world concerns about a growing rich-poor divide that utilises a science fictional gimmick (the “hair”) to both simplify and radicalise the terms of the enquiry (I’ve always been more interested in sci-fi as a poetics than as an extrapolation). But the clinical and gloomy investigation into the nature of poverty is pleasingly tempered by Roberts’ knack for charming characterisation and frequently hilarious satire.  This, if anything, is what justifies Roberts’ couching of his debate in the form of a novel (-as if such a thing needs justifying…).  The satire in question isn’t especially subtle (and his caricatures of the vain, ignorant, unsympathetic rich are so extreme as to be unhelpful in some passages), but I generally found the jokes to be successful, and the culture criticism to be biting and astute.

The first half of By Light Alone is uncomfortable reading. We spend most of our time with George and Marie: grotesque, vain, vulgar millionaires entirely ignorant and dismissive of the wider world and its myriad problems.  They spend their time holidaying and eating various expensive and exotic foodstuffs; partly because it’s fashionable, and partly because they just can.  George and Marie’s children are cared for by a full-time nanny, who is occasionally commanded to bring the kids out so that they might be shown off for 5 or 10 minutes to George and Marie’s equally abhorrent friends – this being the total extent of the interaction between parents and children.

I experienced a strange cognitive dissonance when reading about George and Marie, somewhere between voyeuristically delighting in their vileness, and morally despairing at the unapologetic pride they have in their own ignorance.  Much of the language in the first half of the novel is equally divided: there’s a limited narratorial point of view that seems similarly unaware of the wider “real world”, but which simultaneously satirises the protagonists’ despicable ignorance and gluttony.  It’s impressive stuff, coloured by Roberts’ characteristically dry sense of humour. For example, when Marie admits to a friend that she has two children, the narrator chips-in with this sly description:

‘Two!’ repeated Ys, as if this number were one of those mind-stunning statistics you hear on documentaries about the vastness of interstellar space.

The primary catalyst for dramatic action occurs when George and Marie’s daughter, Leah, is kidnapped while on holiday.  Leah is returned to them after several months’ frantic communication with the local police, but something about their daughter isn’t quite right. She’s lost the ability to speak English, has been forced to grow her hair long and, after months in the capture of poor “longhairs”, hasn’t eaten “hard food” since her kidnapping.  After various psychological and pharmaceutical therapies, Leah slowly returns to her old self, but the process takes its toll on her parents, and this traumatic event inevitably exposes the cracks in their marriage.

The change in George’s world view at this point is a slightly garish and parable-esque U-turn that’s just about in keeping with his pre-established character, but the more interesting emotional fallout is definitely Marie’s, whose search for solace in various lovers, drugs, therapies and hobbies reveals an emotional complexity that tested my pre-conceptions of this rich, vain woman.  She’s still patronising and ignorant, of course, but it’s satisfying that Roberts’ caricatures attempt some emotional depth.  There’s a strange amount of posturing in By Light Alone, and the book constantly had me shifting and re-adjusting my opinions of its characters.  I’m not sure if this is a consequence of deliberate misdirects and red herrings designed to play on my own prejudices, or if it’s just down to some clunky writing.

When ‘what happened to Leah’ is eventually revealed to the reader, for example, I was equal parts pleased by the originality of the twist, and disappointed by its implications for characterisation. I guess it’s down to the caprice of the individual reader to decide whether he can buy-into the idea that Leah’s parents wouldn’t have immediately sussed what was going on, even though Roberts had laid some of the groundwork for their parental ignorance in advance. I’m still not sure what I feel about it, to be honest.

The second half of By Light Alone entails a dramatic shift in narrative focus, and the book now concerns itself with Issa, an itinerant “longhair” trying to reach New York.  The change in register at this point is welcome; long descriptions of food, affluence and luxury are replaced like-for-like with accounts of hunger, poverty and violence.  The tonal move is jarring, but deliberately so. As Issa travels through (I think) Turkey, she is variously assaulted, dehydrated, lost and forced to deal with the Spartacists (revolutionaries set on overthrowing the superstructure of the real-food-eating rich).  It’s harrowing and often deftly-handled stuff, but I found many of the long passages that recount Issa’s wanderings to be tedious, repetitive and a bit too vague in their imagery (I had a lot of trouble actually visualising the landscape).  Perhaps you could generously describe such sequences as the novel’s form mirroring the experience of its subject… but er..hmmm.

Seen from the perspective of the “longhairs”, of course, it is now the super-rich of the book’s opening chapters who appear to be the zombies: constantly stuffing their faces, ignorant about, well, everything, and just kinda brain dead and detached.  I don’t want to take this whole zombie analogy too far (I admit it’s a bit fatuous and vague), but it’s definitely helpful in describing the somewhat ironic way in which the book’s two groups of people (the rich, and the longhairs) see one another. The most successful aspect of By Light Alone is the way the novel appears to set-up simplistic binaries, but then perpetually interrupts the process by shifting the perspective to the other side, to detail the pains and flaws of what was heretofore an “other”.  As I’ve said, the rich aren’t exclusively depicted as emotionally depthless and selfish, and likewise Roberts is keen to avoid any stereotypes of the noble poor (many of the “longhairs’” actions are truly despicable).

So By Light Alone is an odd thing, really. It makes a lot of demands of its readers: you have to buy-in to lots of nonsense that can’t always be waved away as “just satire”, but if you’re willing to read it without too much cynicism, then you’ll find the book to be frequently funny, engaging and, at its action-packed dénouement, genuinely moving.  I found myself having to constantly re-orientate my opinions of its characters and their actions, and this, in some ways, is a good reflection of the complexities and problems of the debate at hand.  The second half of the book is a little too earnest, and definitely over-dependent on unlikely coincidences to drive the narrative forward, but By Light Alone remains a fascinating thought experiment, and definitely worth a read.