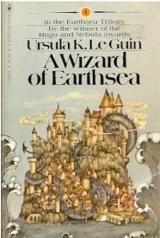 I’m an apostate of epic fantasy.  Until about 5 years ago I was completely up-to-speed and up-to-date with most of the major sagas: ‘The Sword of Truth’, ‘The Wheel of Time’, ‘Shannara’, ‘Coldfire’ etc. and etc.   I’d even attempted, as a teenager, to read whatever it was that Tolkien wrote surrounding Lord of the Rings and The Hobbit: you know, all those long, dorky mythos books and histories (stop sniggering at the back – I’m not ashamed!).  But in recent years I’ve grown impatient with a genre whose current identity seems more dependent on Homeric length than any attempt to break imaginative moulds and creative precepts.  A genre has a problem when I can use the somewhat oxymoronic phrase “standard fantasy setting”, only to find that everybody knows exactly what I mean.

So I gave up on epic fantasy when I realised that the singular sense of readerly joy I was gleaming from the genre was a kind of smug and breathless mountain-climbing satisfaction at the grinding achievement of having read yet another 1000 page tome in which absolutely nothing happens.  To this you could add my more recent intellectual problems with the 200 page end-of-novel historical appendices that seem to dominate the epic fantasy paperscape.  In my view, reducing something as massively subjective and complex as history to a list of ordered names and dates at the back of a book and subsequently claiming (as the fanboys will tell you) that this amounts to narrative depth is nothing but a great big structural fallacy (history is not objective, and meticulous world building is not deep).

But sans all the newest epic fantasy releases piling up on my desk, I still found myself yearning for the more abstract and aspirant tenets of the genre.  This conflict lead me to discover, for want of a better term, “short form fantasy”; and, long story elided: I now encourage you all to read everything by Michael Moorcock and everything by M. John Harrison (if I ever grow the analytical balls, I might attempt a review of his cathedral (adjective) Viriconium sequence).  Sure, short form fantasy appeals to me in practical, time consumption terms, but I’ve also fallen for the sharper focus and experimental lyricism that’s necessitated by the strictures of a much lower word count – there’s a definite feeling that short form encourages more heretofore untried and interesting story telling modes.  The sense of scale and wonder implicit in fantasy now has to come from a ferocious and creative linguistic poetry that’s so often lacking in its epic genre brothers: siblings that too often rely on high page count to craft the illusion of scale, and appendices to craft the illusion of depth, or to function as substitute for the same.

Ursula K. Le Guin’s A Wizard of Earthsea is one such example of short form fantasy that encapsulates all of my more favoured genre aesthetics – a bleak and ambiguous approach to history, psychologically impactful monsters, a sense of massive scale, a barrenness of landscape and a convincing depth of characterisation – and does all of this, without, thankfully, running to 900 fucking pages.

I’m wary of making any grand claims that Le Guin was, in 1968, attempting to subvert a genre whose Tolkien-derived clichés were only just beginning to be instituted, but there’s definitely something gloriously cavalier and anti-establishment about both A Wizard of Earthsea’s form and its content. Nowhere is this more immediately apparent than in Le Guin’s treatment of mapping.  Epic fantasy has a strange hang-up tendency to offer the post-war comfort of relegating evil to a definite and confined place on a map (c.f. Mordor, D’hara, Northland etc.) – and perhaps it’s my own historical imperative of being a post-9/11 reader that’s doing the talking here – but I find this model simplistic, over-used and somewhat of a fop to nationalism and the idea of evil as exclusively external alien otherness.  (I should note that I have no problem with fantasy mapping or imagined geography as a concept – it’s the bullshit metaphors for good and evil that get pasted over the top of these maps that really grind my gears).  Of course such an established and rigid convention of mapping (good is here, evil is here, monsters be here etc.) paves the way for some wonderful tom-foolery at the hands of more ironically self-aware writers – nowhere more so than in the ‘evil’ empire of Grenbretan featured in Moorcock’s Hawkmoon – a fantastic mapped inversion of post-war geopolitical paranoias.  A Wizard of Earthsea takes a subtler, but nonetheless powerfully disdainful approach to subverting this perverse tradition.

I knew I was going to enjoy the book, then, when I encountered the wonderfully indecipherable Jackson Pollock mess that is the mandatory hand-drawn map printed at the start of the text.  Imagine tearing Middle Earth into a thousand pieces and re-assembling it at random, and you’ll have some idea of the paratextual cartography that dominates A Wizard of Earthsea.  The scrawly, scatter-gun map with its too-small-to-read annotations, half obscured by the crease of the binding, is of absolutely no use to the reader – neither as an aid to narrative clarity nor as an aid to a visualisation of the world’s landscapes – but that’s entirely the point.  Its narrative uselessness functions as an ironic and playful exposé of this most bullshitty convention of the genre. 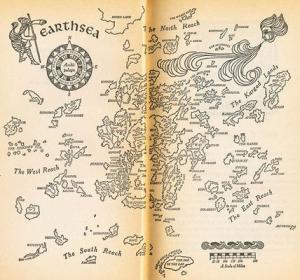 But Le Guin’s playfulness doesn’t end here. There’s a beautifully post-modern dismissal of these conventions in the actual narrative – specifically the ending – which takes place (I kid you not) off the edge of the map.  It’s perfect fodder for imaginative fantasy, and not only pokes fun at the (anachronistic) medieval notion of a flat earth, but makes a more theoretical statement about the limited ability of these fantasy maps to aid or contribute to narrative coherency. Just as the novel ends, when one might arguably rely on the map the most, the map becomes its most useless. It’s extraordinary.

In plotting, A Wizard of Earthsea melds the more familiar tropes of high fantasy (faux-medieval setting, dragons, wizards etc.) with what can only be described as a penchant for those darkest aspects of Weird fiction-inspired horror.  The protagonist, Ged, is a young wizard who, in an ego-driven attempt to impress his classmates, hubristically summons a face-less, name-less, tentacular black monstrosity from some unknowable cosmic place of panic and violence: it would sit comfortably within Lovecraft’s Cthulhu mythos.  And it’s this monstrosity summoned from within, rather than any invading dark wizard with his deformed armies of foreign others, that stands as the primary antagonist.  The book is essentially a bildungsroman; Ged’s quest to locate and overcome this dark, passion-ridden and uber-brutal creature stands as a metaphor for the suppression of the id and his arrival into adult life and responsibility.

Only one man’s life is at stake; and, as I’ve stated, there’s no mad, demonic force trying to destroy the world without ever quite explaining how it is they’d benefit from such an endgame.  While this offers a pleasing alternative to the standard fantasy plot, the tight focus on one individual does come at the cost of weaker characterisation elsewhere.  The majority of the book’s characters play to familiar type: there’s the pederastic old wizard-mentor, the homosocially charged relationship with a loyal best friend, the parents who aren’t themselves magical, and the usual given allotment of tavern maidens, dragon kings, helpless villagers and taciturn knights.  So although A Wizard of Earthsea wilfully experiments with the praxis conventions of epic fantasy, it remains very much enamoured of the base aesthetics of the genre: it’s still a rollocking good medieval Fantasy at heart.

So, yeah, A Wizard of Earthsea stands as further testament that it tends to be within the constraining vagaries of short form Fantasy that the genre is at its most experimental and subversive.  The book isn’t a radical genre departure, nor is it dismissive of its roots, but if like me you’re feeling more-than-a-little fatigued with “epic” fantasy, I recommend you give short form a try – and this is as good a place as any to start.

10 responses to “A Wizard of Earthsea – Ursula K. Le Guin”