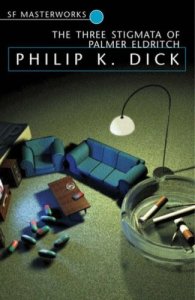 The Three Stigmata of Palmer Eldritch is characteristic of PKD’s opus in that it presents a focused and imaginative exploration of substance abuse, sinister technocracies, planetary crisis and the moral controversies that surround developments in technology and scientific research.  It also hints at the more transcendental/metaphysical themes of personal identity and existentialism that would come to dominate his later output, and which offer a refreshing counterpoint to the bigger, colder investigations of business practices and political manoeuvring that dominate much of the book’s back-story. In this regard, The Three Stigmata of Palmer Eldritch (hereafter TTSOPE) reads somewhat like an ur- or proto form of Valis or A Scanner Darkly.

Unfortunately, being characteristic of PKD’S opus, TTSOPE suffers from an attendant weakness of characterisation that, in some places, actually began to impinge on and confuse my understanding of the narrative.  I was baffled, for example, by protagonist Barney Mayerson’s self-imposed exile on Mars that dominates the middle of the novel. Baffled, that is, until the narrative helpfully informed me that the roots of this voluntary ostracism lie in Mayerson’s irresolvable feelings of guilt over abandoning his friend Leo. All well and good; except that, until this point, I had no sense whatsoever that Barney and Leo were so close, or that the former’s betrayal of the latter was at all the ‘big deal’ that the subsequent chapters made it out to be.  Even when the book takes great post-facto pains to make this clear, I struggled to buy into it.  The two leads, Barney and Leo, may as well be the same character: their frequently inconsistent actions, dialogues and behaviours seem more in service to the demands of the plotting than any graspable notions of distinct personality or character.  If you were feeling particularly generous, you might posit that this vague and blurry presentation offers some kind of narrative reflection of the book’s concerns with addiction and its accompanying destruction of individuality and independence, but to do so would be somewhat disingenuous. Pushing it, even.

The supporting cast, however, is significantly less two-dimensional.  Freed from the overbearing mechanisations of Dick’s stringent plotting, the minor players are afforded more breathing room for development and expression.  I particularly liked the ambitious and intelligent Miss Roni Fugate, whose initial presentation as an over-sexualised foil in contrast with the lead’s cold ex-wife is eventually revealed to be a crafty misdirect, and she is quickly developed into a deep and (dare I say) complicated character piece that stands as testament to PKD’s reputation as a master craftsman of post-sexist sci-fi societies.  I also liked the titular Palmer Eldritch himself, especially the pleasingly un-resolved events that culminate in his madness/reincarnation/apotheosis (/whatever the hell happens to him).  Regrettably, the cumulative screen time of these two characters only amounts to a tiny percentage of the overall book, but nonetheless, they do contribute some much needed breadth of characterisation, and stop TTSOPE from becoming entirely stolid and staid in the character department.

Thankfully, the strength and momentum of TTSOPE’s ideas carries the narrative forward in a way that almost transcends the book’s numerous problems with shallow characterisation.  I guess it’s down to the caprice of the individual reader whether or not the brilliance of a book’s ideas are enough to compensate for a weak and unsympathetic cast (-and obviously the two aren’t mutually exclusive-), but the novel definitely functions better when approached as “ideas fiction”.  TTSOPE is about the arrival into the solar system of a new transcendental drug (“Chew-Z”) which, when imbibed, radically alters the subjects’ perception of time, allowing them to enter a hedonic dreamworld of their own devising.  It soon becomes apparent, however, that users of the drug are haunted by the cadaverous spectre of its creator, Palmer Eldritch; both while under its influence and long after its immediate effects have worn off.  Obviously there are some quaint real world parallels to be made between this and the paranoic side-effects of real long-term substance abuse; but where these druggy connotations become most interesting, I think, is in their potential to screw with the reliability of the narrative.  Once under its influences, a user has no choice but to wait-out the drug’s trippy effects, no matter how many subjective years this may take:

“Be a rock, Mayerson. Last it out. However long it is before the drug wears off. Ten years, a century. A million years. Or be an old fossil bone in a museum.”

What’s more, Chew-Z presents its users with various layers of reality – dream worlds within dream worlds within etc. etc. The first time a protagonist takes the drug may represent the actual end-point of the novel, with all subsequent chapters (even those which appear to show a return to the real-world) merely being further dreams within dreams.  Never one to sit on the fence, I like to assume that this most definitely is the case, and that page 100 or whatever marks the chronological end of the book, the subsequent 200 pages (including the happy ending and eventual defeat of Chew-Z) are just a trick of the light – a fantasy held by Leo while trapped (presumably for hundreds of subjective years, but a real-time of mere seconds) by the drug’s weird trippy effects.

Both scenarios (the entire second half of the novel being a dream within a dream, or being an actual reality) are supported by some very nice stylistic idiosyncrasies on the part of PKD.  I posit as my evidence for the former scenario the constant mispronunciations of the protagonist’s name, which only begin to pepper the text after he has used for the first time, suggesting that something in the narrative representation of the world has changed.  Of course, this could similarly be read as a post-recovery side-effect or auditory hallucination; but, as always with me and such things, it’s the more fantastical interpretation that most appeals.

What The Three Stigmata of Palmer Eldritch lacks in characterisation it more than makes up for in narrative playfulness and the scope of its ideas – it’s cosmically ambitions sci-fi that forces the reader to constantly re-adjust assumptions about the direction and reliability of narrative – how it relates to itself, and how it relates to the real world.  When the first character pops his first dose dose of Chew-Z he can no longer rely on the veracity of, well anything – but neither can the reader.  Stylistically the book’s a bit hit-and-miss; some swift and functional constructions occasionally interrupted by more purple, less convincing, prose. But, as I say, this is Big, Ideas fiction, rather than a subtle microcosmic work of art. If you want a modern corollary, TTSOPE is a bit like the 2010 film Inception – it has a similarly wooden cast of characters and weird examination of dreams-within-dreams, albeit without any of the massive plot holes; or the rampant plagiarism of a mid-period Philip K. Dick novel *cough*.