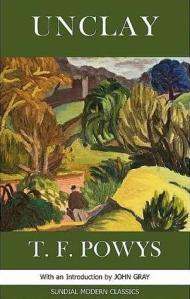 Generally speaking, I find that modern (well, in this case early 20th Century – but let’s not split hairs) attempts to appropriate or re-introduce or bastardise (or whatever) the medieval notion of the moralising allegorical characterology vary from incredibly irritating to down-right offensive (I’m looking at you Philip Roth (has anyone here actually read Everyman? (Roth’s novel, not the original play) – uurrrch, what a mess)).  By “allegorical characterology”, I mean all those personifications of moral abstracts that function as the literal protagonists of early medieval drama:- plays like the aforementioned Everyman or Wisdom or Mankind,  all populated by such “characters” as ‘Truth’ and ‘Felawshyp’, ‘Goodes’ and ‘Knowledge’ and ‘Kyndenesse’ etc.  Which is fine, I like medieval drama as much as the next.. er… dork; I mean, it inevitably results in some spectacularly unsubtle brick-to-the-face catechisms like “Everyman must forsake Pryde, for he deceyveth you in the ende” etc., but the intended function was evangelical and proselytizing rather than lyrical or poetic. Even today their value leans more towards the historically educative or curious than the literarily significant (and yup, I did have to read this stuff at university – can you tell?).

Anyway, as I was saying: attempts to introduce these types of personifications into modern fiction have a tendency to get on my nerves – not always, I’m not going to start bashing Ingmar Bergman’s The Seventh Seal or anything – but I often find them to be quaint, overly earnest historicisms rather than the revelatory and prophetical system-shocks that so many writers so obviously intend.

Just imagine my trepidation, then, when I opened T.F. Powys’ nearly-lost weird fiction curio Unclay only to discover that the lead is one Mr Death, a (or should that be ‘the’?) r(/R)eaper living in the quasi-fictitious rural village of Dodder.  Death has been sent to ‘Unclay’ (verb – a neologism but w/ obvious etymology) two of the village’s inhabitants, though finds himself unable to do so having lost the slip of parchment upon which the names of the unclayees are scribed.  Unsurprisingly, the narrative is peppered with such horrible wink-wink/nudge-nudge constructions as ‘Death is just around the corner’ or ‘with gladness they saw Death come’ (etc.), but given Powys’ elsewhere magnificent prose, it’d be somewhat harsh to attribute the clumsy and frankly boorish nature of such phrasings to any deficiency of his; rather, this ungainliness, lacking in both humour and depth, more likely exposes the weaknesses and inherent problems in this kind of personification as a narrative form than in Powys as a writer. But setting that aside as my own idiosyncratic problem with the genre, I quickly discovered that there’s a heck of a lot to like about Unclay.

Powys’ prose is a strange mix of aphoristic religious argot, abstracted dreamscape, grammatically non-standard expression and hallucinatory horror that calls to mind modern Dadaoist writers like Michael Cisco or Thomas Ligotti far more than any of Powys’ own 1930’s contemporaries.   Yet counterpointed against this arch and affected style is a lyrical romanticising of the rural and bucolic English countryside that’s almost Thomas Hardy-esque, both in its nature-heavy descriptions and its eagerness to present a countryside that’s at once beautiful and wild; sacrosanct and carnal.  And if that’s not weird enough for you, wait until you encounter the book’s supporting cast: a woman who thinks she’s a camel, a man who’s transferred his libido into a line of nut trees, and a priest who convinces women to become prostitutes, only to spend hours reading Jane Austen to them in an attempt to curtail their wickedness. I swear I’m not making this shit up.  Imagine Tess of the D’Urbervilles on acid, and you’ll get the picture:

As Joe Bridle bent over the pond, two dead corpses rose up but, when he thought he knew their sodden dead faces, the waters thickened and the faces vanished […] When the wind grew still, other things happened, Horrid creatures – great pond beasts – newts and vipers, swarmed about him in the darkness. A year-old corpse crawled out of the water and clutched at the paper with foul dripping fingers.

Once settled in Dodder, Mr Death discovers sex in what is, essentially, a strange literalisation of the Thanatos meets Eros psychoanalytic paradigm. It’s (at last) a creative use of death as personification, as Powys externalises the death//sex desires by making his Mr Death sexually irresistible.  By having (almost) the entire cast sleep with Death at one point or another, Powys converges the sex drive with the death drive in what’s both a striking visual tableau and a blackly comic attempt at a literary proof of Freud’s most famous subconscious pairing.  Of course there’s more than a little ironic sardonicism in Death’s new found joi de vivre and sex addiction, but this kind of mischievous exploitation of ostensibly incongruent ideas is probably the best example I can use to sum-up the dark, goulish playfulness of Powys’ writing. There’s definitely some sympathy with the notion of Death as the cosmic jester, as epitomised in the medieval danse macabre aesthetic tradition; and if death vs. sex isn’t your particular brand of literary tote-bag, don’t fear – there’s a whole cardinal’s migraine of sinful/holy pairings being subjugated to Powys’ gallows-humour marriages of the disparate. 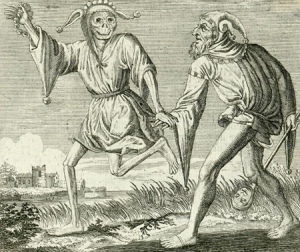 There’s also some dramatic irony at play: the reader knows that Susie, the significant object of Death’s affection, is the very person he has been sent to Unclay, and while this adds a trite level of predictability to the book, especially with regards to the you-can-see-it-coming-from-a-mile-away ending, the obviousness of the dénouement is essentially mitigated from any tedium because inevitability and fatalistic determinism (if not nihilism) are the very themes the book is all about. There’s a pleasing sense of closure as Powys simultaneously toys with and meets the reader’s expectations of the narrative in a way that mimics the teasing unpredictability yet ultimate inevitability of death (and Death).

As far as I can tell though, a lot of people’s negative reactions to the book have origins in T. F. Powys’ meandering, abstract and, let’s be honest, very difficult prose.  Everything I’ve mentioned above; the comic exploitation of BIG and SERIOUS ideas, is all undercut (though I think, also, augmented) by the achingly sad and obvious fact that Powys was a man plagued by deep religious conflict.  There are frequently long, tangential and inconsistent musings on the book’s themes and characters, as Powys performs exegesis on his own text in an attempt to settle his religious problems.  These often take the form of grand philosophical aphorisms or maxims, which are then only repudiated and thrown into question by more grand aphorisms and maxims later on.  Definitely Christian, it’s difficult, however, to parse any sense of an established orthodoxy. The kind of moral inconsistency that glorifies in comic representations of sex and marriage but expresses a shocking disgust and conservatism over, say, the notion of unbaptised babies makes Unclay a dramatically unstable and ungraspable book – which I think adds all the more to its beauty and depth, but could understandably be read as incredibly irritating.

I’ve probably not done Unclay justice, if only because it’s strikingly difficult to write briefly about without also performing an almost sacrilegious disservice to its complexity.  It’s at once beautiful and disgusting, open-minded but horrifically sexist.  There’s a sadness to be found in Powys’ brave and comic but ultimately unresolved wrestling with his own strange conception of religion and morality.  The danse macabre trips its steps all over the fields of Unclay, in all its inconsistent, cadaverously cackling jest.