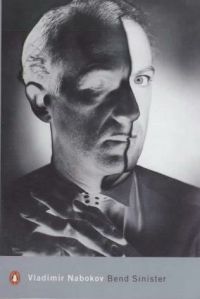 Ah Nabokov.  Verbally ebullient Nabokov. Na-Bo-Kov.  Did you know that he hand-wrote his novels on numbered blank postcards?  As friends of mine who’ve kindly put up with my eulogistic diatribes in praise of Nabokov’s brilliance will be aware, he’s one of my favourite writers, and perhaps my very favourite stylist.  But what’s that you ask?  If I’m such an ardent fan, why have I only just read his black comic dystopian masterpiece Bend Sinister when surely any genuine and discerning Nabokov devotee would have devoured said novel the instant they learnt of its existence?  Well, such is my love for Nabokov, that rather than be the fat kid who spoils his pleasure by stuffing all the ice cream down his throat in one exorbitant gorge of deliciousness, I’ve decided to stretch my consumption of Vlad’s output over a long period, all the better to savour the piquancy of his genius.  So, it’s one or two Nab novels a year for me, which means I have many years of Nabokovian banquets ahead. Geez, does writing about books make anybody else feel hungry?

Bend Sinister is set in some non-disclosed East European country recently renamed Padukgrad in honour of its new dictator Paduk, leader of the totalitarian ‘Average Man’ party.  The party is a philistine, para-military organisation whose conform or die approach to government and mandate to suppress all expressions of individuality has clear real world parallels with the far-leaning regimes of Nabokov’s contemporary Europe (he wrote this in 1945).  As such Bend Sinister can loosely be grouped with a whole host of other first-half-of-the-century reactionary dystopias such as Brave New World, We, and of course Nineteen Eighty-Four.

The significant point of difference is that Bend Sinister is strikingly more comic than other novels of its oeuvre.  The protagonist isn’t a noble dissenter whose valiant struggle against oppression and subsequent defeat at the hands of unstoppable evil is the ultimate expression of righteous individualism; instead, Adam Krug is an aloof and detached professor of philosophy, fundamentally dismissive of the party and its aims.  He’s the former class mate of the dictator Paduk (a parallel to Wittgenstein, a one-time class mate of Hitler’s, perhaps?) and used to bully the crazed leader in a daily routine of “sitting on his head”.  The crux of the novel is that the ‘Average Man’ party desperately wants the endorsement of Krug to bolster the world standing of their philosophy, Ekwillism (sounds like ‘equalism’, geddit?), but as a world famous philosopher, Krug’s too well-known to be threatened with death.  What ensues is a disturbing and dark sequence of intimidation; a kind of fear campaign led by the party against Krug, which sees his friends arrested, his possessions taken and his child abducted.  Somewhat predictably, Krug only comes to his senses about the true power of the party when it’s just a little too late.

So far so de rigueur, and before I started reading BS (actually, probably shouldn’t call it that…) and before I started reading Bend Sinister, I anticipated that this would be an easy review to write.  A couple of sentences about freedom here, a warning about the dangers of totalitarianism there, a short comparison with Orwell’s book… and we’re done.  But ohhoho (that’s Nabokov laughing), oh so naive me: – Bend Sinister just isn’t as (dare I say)… obvious as any of those novels mentioned above.  It’s beset with a kind of dark and sinistral irony that contorts all clarity and distorts interpretation; nowhere more so than in the novel’s bewildering introduction, in which Nabokov lists and systematically rejects all labels a reader could use to classify the novel: satire? Nope. Didacticism? Guess again. Parody or analogue? I spit at you! In fact, Nabokov refutes almost every possible interpretive tag, but without actually providing a suitable alternative.  Obviously this isn’t up to him, right? And I read the introduction with the same cautious lookout for irony that I employed while reading the rest of the novel, “he must be joking”, I thought, “some of this critical mud must stick” – but dammit if it didn’t play on my mind, and it was this half piss-taking, half deadly serious tone that coloured, for me, my experience of Bend Sinister.

So where does that leave this review? My one-size-fits-all dystopian fiction critique isn’t going to cut-it, and besides, it’s somewhat dull to regurgitate the same thoughts about freedom, extreme politics, oppression and art as resistance that have been used and used and used in countless school essays on Nineteen Eighty-Four.  Similarly, I don’t want to fall into the trap of attributing any of the critical labels to Bend Sinister that Nabokov so forcefully rejects in his introduction, even if that was all one big joke.  Instead I’m going to talk briefly about the book’s myriad images and metaphorscapes – surely there’s interpretive substance in that, Nabokov being such an imagist master and all?

The book begins with a description of an oblong puddle outside a hospital in which Krug’s wife has just died, reflecting the building, sky and pavement in a grey mimicry of the real world (which, of course, isn’t actually real – but just the world of the novel).  As well as forming a striking metaphor for grief as a spreading “tentacled black dampness” through which the world is viewed at a muted remove, this image is an emblematic introduction to the novel’s foremost problem: that of being able to discern what’s real from what’s mere imitation.  I often fixate on Nabokov’s penchant for doubles (for e.g. the Humbert Humbert dualism in Lolita (both the protagonist’s name and his sinister shadow Mr Quilty), the doppelgangers in Despair or the unknowing love rivals in Laughter in the Dark) but in Bend Sinister it’s the entire world that is constantly re-created, copied, doubled and reflected; first in the grey puddle, later in mirrors, spilt milk, theatre and language (Krug’s nickname is ‘mad adam’ – a nice little palindrome/mirror image).

Early on, Krug attempts to cross a bridge only to be turned away by guards on the other side – but, once he re-arrives at the bridge’s beginning, a new set of guards turn him back; and so he is forced to wander between two sides of a bridge, repeatedly turned-away at either end.  The image of our protagonist walking back and forth, back and forth along a bridge is bizarrely comic, but also functions as a visual metaphor for his mental state: the bridge is a hinterland that he is struggling to cross: from his married life into widowerhood, from happiness into despair – and also, for the country, the bridge symbolises the new regime: a crossing from one political shore to another (if you want to be twee about it).  Such metaphorically loaded imagery is repeated over and over, and always in a way that questions rather than cements an impression of reality: reflections in mirrors, artificial lighting, mirages – all visual preoccupations that suggest copies or clones of the world, forcing the reader to question deeper parallels between the world of the novel, and our own.

So Bend Sinister is filled with other worlds: in reflections and paintings, over bridges and through echoes and even puns, everything is at a remove from reality; viewed in a mirror or through a double or as a shadow.  There’s even a nice passage in which an oak tree is replaced by an iron copy, which serves as a metaphor for the difficulties of translation, but also highlights a fundamental problem with allegorical fiction: the world of the novel is not our own, but an imperfect and artificial cipher.  There are moments (particularly towards the end) in which Krug seems to acknowledge his identity as a character in a fiction (frequent changes of narratorial register into the first person can be explained as Nabokov acting as voice of the ‘creator’, speaking on behalf of his protagonist).  Krug’s inaction in the face of the tyrannical new regime is even parodied by constant references to Hamlet, reinforcing the idea of theatre, performance and the artificial.

Krug is always on the bridge: between the old politics and the new, between happiness and grief, and, crucially, between our world and his own.  Fundamentally, I would argue that Bend Sinister is a novel preoccupied with the creation of itself.  The visual landscape, rampant with removes, doubles and shadows, is a symbol of the book’s own relationship with the real world: simultaneously familiar yet strange and removed (is ‘uncanny’ applicable here?).  Ironically, it’s through his madness that Krug sees most clear and realises that he’s not real: mirrors and plays and paintings and shadows bring the reader’s attention to the artificiality, the art, of it all – the layers of life and perception that colour the world with beauty and depth.  Yes there’s a run-of-the-mill dystopian critique of totalitarian politics to be found here, if that’s really your bag – but more than that, Bend Sinister is a novel about writing novels, which explores the hinterland in which our world ends and the novel’s begins: we are looking in at Krug, but he is also looking out at us.  Crucially this highlights the significance of art (the ‘freedom to art’, if you will) in the creation of our own world.  Freedom of thought, Nabokov insists, is Freedom of Art. When political tyranny obstructs this freedom, the final result isn’t a poorer world, but [spoilers]: the end of the world.  In case you’re wondering, a ‘Bend Sinister’ is a diagonal band drawn from the left side on an heraldic coat of arms: a divide or split in the world, a crack in the mirror.