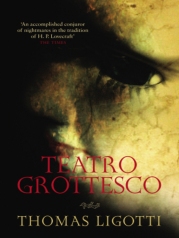 Given the internet’s propensity for yielding up every sordid detail of even the most negligible popular figure’s life, it’s somewhat unnerving quite how difficult it is to find either biography or photograph of Weird Fiction maestro Thomas Ligotti.  But this remoteness of the writer, if you will, is part of his aesthetic appeal – his withdrawal is almost a continuation of his narrative agenda to disturb and horrify.  The majority of his narrators are likewise isolated and misanthropic, and this parallel between Ligotti and his protagonists brings a quasi-autobiographic tone to his writing which, given the incredibly weird and distressing nature of these stories, augments the reading experience by making it that much more unsettling.

Teatro Grottesco is a collection of thirteen short stories (give or take (some include ‘micro’ narratives inside themselves)), in the horror genre.  What kind of ‘horror’, precisely, is difficult to say, because while Ligotti doesn’t conform to any of the basic genre types of slasher-gore, paranormal, supernatural, serial killer (etc.), he doesn’t ignore them either.  Instead he offers a subtle convergence of all of these ranks of horror while simultaneously corrupting and distorting them from their more classic/familiar incarnations.  For example, Ligotti’s conception of viscera isn’t a hyperbolic focus on blood ‘n’ guts, but a half-glimpsed suggestion of mutation, tumorous growth and sick, malformed bodies.  This is most prevalent in the opener ‘Purity’, which sees a fetishising of the latent horror implicit in extreme body types – from the incredibly obese to the deathly emaciated or over-tumoured – the reader is unnerved not by any explicit focus on blood/bile/organs – the inside aspects of the body which commonly dominate horror – but by an external grotesque which, mostly hidden in shadows or shooed away, is all the more disturbing for its malformity – such bodies cannot exist without something having gone drastically wrong.  In this aspect, Teatro Grottesco is strikingly Lovecraftian: the body isn’t a healthy temple which spills its secrets when sliced from the outside; it’s instead an internally corrupting, treacherous, sickly and unhealthy shell liable to bloat itself or shrivel or grotesquely mutate: unreliable and frightening.

Similarly, Ligotti’s approach to the supernatural is unconventional.  In the title story ‘Teatro Grottesco’, an elusive, never-seen theatre company drains all ambition and creativity from any artist precocious enough to enlist their services.  Not only is this a bizarre re-imagining of Vampire mythology (the sucking away of lifeblood), but it also functions as sarcastic metaphor for what Ligotti clearly sees as a rampant lack of creativity in his own genre and, on a more pernickety level, a grotesque manifestation of the author-centric fear of writers’ block.  Elsewhere the supernatural is less explicit, such as in ‘The Red Tower’, which is a brief description-piece about an abandoned factory that used to produce and ship creepy artefacts. Underneath this factory, however, sleeps a more disturbing and surreal manufacturing space of the grotesque.  This is microcosm for much of Teatro Grottesco’s supernatural moments: they occur off-camera, beneath the words – conjured via suggestion and narratorial guesswork as much as by explicit description or explanation.

That Ligotti’s narrators are all (without exception) unreliable is simultaneously both problematic and beneficial to the portrayal of the supernatural.  Where Ligotti is highly skilled in drafting incredibly varied, different horror stories, he conversely suffers from a singleness of style which colours all of his work with the same narratorial tone.  Every story here is narrated in the first-person past tense, and each is told by an alarmingly disturbed individual; narrators who suffer from extreme anxiety, panic attacks, depression, schizophrenia, insomnia and self-imposed loneliness.  While this forsaken identity gives the narrator a privileged position as social outsider, perfectly situated to recognise and name the supernatural for what it is, it also makes him an unreliable storyteller.  Such obsessed individuals brilliantly unsettle the reader, as we see everything through the eyes of a very specific and disturbed subjective – but, as I’ve stated, this is also problematic, as any combination of madness with the paranormal begs that most boring of naturalist questions: is anything real?  Is the narrator of ‘The Clown Puppet’ really terrorised by a deformed, life-size wooden mannequin, or is the puppet merely a narrative manifestation of our mad narrator’s internal psychoses?  Such a focus on disturbed narrators has the double-edged-sword effect of giving the stories an unsettling point of view, while also throwing into doubt the very truth of the horror.  Horror that, once dubious, loses much of its power.

Location also suffers from a lack of variety in Teatro Grottesco.  Abandoned, out-of-the-way towns are the norm: and while this is a great setting for stories and revelations of the uncanny and horrific variety, it does get a tad repetitive.  Similarly, the locales of these short stories are so idiosyncratically weird, and so intertwined with the narrator’s identity, that I couldn’t help but read many of them as a psychological construct, their presentation entirely a subjective description – maybe our mad/anxious/depressed narrator has conjured up these grotesque towns from the walls of a mental institution in which he’s imprisoned?  Are the phantoms his nurses? The ghouls his fellow inmates? The locked rooms inaccessible hospital wings?  It’s difficult to ignore these questions in stories that are so prominently concerned with madness .  Unnerving in themselves, when they pop-up in story after story after story they begin to wear.  As brilliantly disturbing as Ligotti is, the singularity of his approach came as a let-down.  But maybe this is a failing of my own making.  I recommend you don’t read Teatro Grottesco as I did: cover to cover, like a novel.  After all, many of these stories were written decades apart, in which case, it’s probably a little disingenuous of me to highlight their uniformity.

A final point about style( one I can’t ignore) is Ligotti’s preoccupation with repetitious phrasing.  In almost every story there are long phrases that are repeated in their entirety again and again and again: they pound into the reader’s mind like some kind of verbal hammer – reinforcing the concept of madness while concurrently enclosing the reader in a claustrophobic space of constant, inescapable repetitions.

If I had to pick a favourite story, it’d be ‘My Case for Retributive Action’ – set in a perpetually mist-covered American town, it’s a quasi-comic and highly disturbing story about infinite working days, meaningless paper-work that’s endlessly recycled (you can see the satire) and grotesque rumours about a deformed man-spider responsible for the maddening sounds that haunt the town.

Ligotti’s nightmarescapes didn’t scare me as much as they left a lingering sensation that I’d been unsettled and disturbed by something in my own mind.  These are stories preoccupied with the individual’s struggle to find meaning and definition in a hostile and increasingly repetitive world – and in this regard they’re strikingly modernist: a space in which, to quote: “there is a killing sadness that feels as if it will never leave me no matter where I go or what I do or whom I may ever know.”