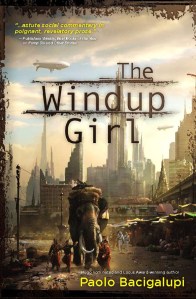 In 1972, The Club of Rome (a kinda international politically-motivated think tank) commissioned a book called The Limits to Growth, which stipulated that finite fuel reserves, space and means of food production cannot indefinitely support an exponentially increasing global population.  Their end-game predictions include: mass starvation, economic breakdown, rising sea levels (due to ever increasing demand for and consumption of fossil fuels), over-population and a hyper-spread of urban sprawl/megacity residency centres.  Their solution?: population and economic escalation should be curtailed until a sustainable plateau is achieved, therefore avoiding the apocalyptic scenarios forecast by these theories of run-away growth.  Of course, such ideas receive relatively little media attention because, frankly, opposition to growth of any kind is tantamount to political career suicide.  Well, imagine a fiction in which these predictions have all come true, and you’ve pretty much got the setting of Paolo Bacigalupi’s near-future dystopia The Windup Girl.  Just add rape.  Lots and lots of rape.

The novel is set in a non-disclosed but presumably not-too-far-off future in Bangkok, which is now just below sea-level and protected from floods by a ring of levees.  The world’s oil supply is depleted, the city bakes in a perpetual heat wave and food is either synthesised or scarce.  So far so Soylent Green. Electricity is harnessed from giant battery-like coils called kink-springs (I know, I laughed too) that store kinetic energy and are wound by genetically engineered elephants (‘megadonts’) in massive factories.  One such factory is owned by our protagonist, a man with possibly the most cringe inducingly B-movie name in recent sci-fi literature: Anderson Lake.  But Anderson Reservoir isn’t all he seems – his factory is merely a front that provides him with protected residency in Bangkok: he’s really an American ‘calorie man’, one of many such individuals scouring the world for rare disease-resistant foodstuffs.  He’s in Bangkok to negotiate a military coup of the city state with the Ministry of Trade: Americans will provide men/fire power in exchange for access to Bangkok’s vaulted seed bank.  The only thing standing in their way is the militantly jingoistic and quasi-religious organisation The Environment Ministry (the ‘White Shirts’), who’re tasked with making sure that nothing too ‘foreign’ (people, goods, disease etc.) gets into the city – they’re isolationists bordering on racist.

While searching the city for rare ‘gene hacked’ edibles, Anderson Pond encounters (and soon falls for) the titular ‘Windup Girl’; a Japanese genetic experiment called Emiko.  She’s a sex slave in a high class Bangkok brothel, which is just what she was created to be: Emiko has been genetically fixed so that she cannot resist the urge to please.  Basically, she’s a kind of future sex toy.  Don’t be fooled by the given name, she’s not a ‘windup girl’ in the clockwork sense – rather, this a derogatory label used by the people of Bangkok to describe Emiko’s quasi-artificiality.

The book has a large ensemble cast, with each chapter told from the sympathetic third person POV of one of about eight characters – and I don’t have the stamina (and I imagine you don’t have the patience) to go into them all here.  But notable among the chorus are: Hock Seng, a semi-legal Chinese-Malay immigrant who hopes to steal the kink-spring blueprints and sell them to local mafia-esque crime don ‘The Dung Lord’; Jaidee, a trigger happy ultranationalist, and Kanya – his second in command.  Once this ragtag dramatis personae is established, Bacigalupi proceeds to weave his plot threads into the narrative equivalent of the spaghetti junction: rather than being conceptually or stylistically difficult, The Windup Girl is convoluted in its plotting, with some characters so tenuously related to the central narrative that you wonder why they feature at all.

Stylistically the book isn’t up to much either; frequently garrulous where it needn’t be yet restrained when explanation/clarification is most required.  Instead of being a quirky tick or stylistic flamboyancy, this is just incredibly irritating.  Explanations of strange religious rituals and quirks of new technology are too often cut-short, whereas extended descriptions of Emiko’s sadistic rape are overly long and gratuitous.  Arguably the horrifically vivid rape scenes are necessary to shock the reader or to make a laboured social comment about sex slavery (Emiko as a living sex toy becomes the ultimate metaphor for the sexual objectification of women: built just for sex, will-less, programmed to please, literally unable to say no): but, Bacigalupi, I got the point the first time, the fourth/fifth/sixth such number is just filler.  I’m sure a certain type of reader will revel in the sordid sex, others may be dense enough to require a point be hammered (pun unintended) home repeatedly for it to sink in, and some readers may genuinely enjoy a kind of self-righteous moral outrage inspired by such scenes which makes them worth revisiting.  But, for me, once was enough.

The Windup Girl should be lauded for its intricacy of plot, and Bacigalupi has really done his research when it comes to Chinese-Malay-Thai racial tensions.  The book is unashamedly intelligent, and the unforgivingly convoluted plot asks a lot of the reader’s attention to detail (not a bad thing).  But said intricacy is somewhat of a double-edged sword, and all too frequently the reader encounters narrative red herrings and dead ends.  For example, after one particularly violent sequence, I was convinced that Emiko isn’t really a sex-slave, but one of the fabled ‘military windups’ sent undercover to Bangkok to perform a series of assassinations; I speculated her cover to be so complete that even Emiko herself doesn’t know the truth of this, and genuinely believes that she’s a clone of the sex-bot variety – and maybe her genetically altered mind is triggered to ‘activate’ her military nature when certain conditions were met.  But such speculations on my part were soon squashed, and the truth behind the novel’s more violent events turned out to be much more mundane than my own speculation had led me to believe.  Disappointed.

But it’s not all bad.  There’s a pleasing Biblical sub-text functioning in The Windup Girl; in fact, it’s so striking that it almost extends beyond the merely figurative. The Windup Girl’s dystopia can be easily described using religious terminology: if the society is post-lapsarian (the age of western abundance is over and the world has fallen into decay) then Anderson is exiled Adam, desperate to regain access to his lost Eden (the endless bounty of fruits now sealed inside the seed bank) and Emiko is Eve – a parentless construct cloned from genetic material purely to provide “company” and entertainment for men – their ‘A’ and ‘E’ initials are probably incidental, but are nonetheless a satisfying addendum.  Without wanting to give too much away, there’s also a resurrected martyr and a fittingly eschatological flood; the novel is even overflowing (geddit?) with superlative churchly language: ‘destiny’, ‘divine’, ‘redemption’, ‘prophecy’, ‘atonement’ etc.  Why is this analogy relevant? – especially when it’s so at odds with the futuristic brand of bio-punk Buddhism adhered to by the novel’s protagonists?  Well, I suppose it contributes to the sense of scale that Bacigalupi is clearly aiming for, but more significantly it places a burden of mythos on the characters’ shoulders which simultaneously highlights their roles as world-changers and augments the book’s narrative preoccupation with rejuvenation, repetition, reincarnation cycles and the sense of history repeating/re-starting – a set of interests which is echoed in imagery as much as in plot.

So there’s a lot going on in The Windup Girl, and lots for the literary dork to unpick (there’s a nice collection of Lewis Carol references, such as literally chameleonic cats called ‘Cheshires’ etc.) but the most interesting parts are unfortunately sidelined by political concerns, and while constructive racism, immigration theory and green anti-GM politics are fascinating topics, I couldn’t help but feel that they choke the narrative; their little tendrils wrap around every aspect of the book to the extent that the more weird/wonderful and sci-fi aspects just don’t have room to breathe and, let’s face it, these are the things we read sci-fi for.  Several major (and obvious) questions also go unanswered: this may be a post-fossil fuel society, but why is there no mention of solar, wind, hydroelectric or nuclear power sources?

It’s a very long reading experience peppered with a small, scattered collection of interesting moments. The novel’s ending tableau is fantastic and the windup girl Emiko is so down-trodden it made my heart bleed (I should probably get that seen to, etc.) but the best bits are underdeveloped and the worst drag on and on and on (and on…).  Oddly enough, I found the most-hyped aspects of the book to be ludicrously overrated, and the quieter, more experimental moments to be bathetically underrated.  I hope I’ve given you enough to think about: it’s long, but there are flashes, and these brief junctures of brilliance just about make The Windup Girl worth reading.  Just.