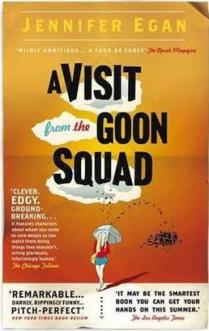 2 A stolid or stupid person

I wasn’t quite sure what Jennifer Egan meant by ‘Goon’ in the title of her newest novel: so I looked it up (see above).  Now that I’ve read it (the novel), I’m even more confused, as none of the above definitions seem fit for purpose.  Then I thought; perhaps ‘Goon’ belongs to some modern American vernacular that hasn’t survived the transatlantic crossing; Jennifer Egan being the shining darling of the New York metropolitan literati – but investigations down this route proved equally fruitless.  What does she mean by ‘Goon’?  Well, I can only guess that Egan is attempting some kind of neologism, by taking an existing word and applying a new meaning to it (there’s probably a name for this – most likely to be found in a dictionary of technical rhetoric – but I don’t own one.  Suggestions on a postcard, etc.); in the case of this book ‘the goon squad’ seem to be the spectres of age or passing time: like Marvell’s winged chariot re-imagined for the post-modern generation.  If such a thing exists.

A Visit from the Goon Squad employs an eclectic cast of middle-class urbanite American baby-boomers to tell a story of time, distance, regret, loss and memory.  But before you groan at the prospect of yet another downbeat and middle-brow hyperrealist novel of the Ian McEwan variety, let me say that while its subject matter may be de rigueur, this novel’s form and style are refreshingly innovative; experimental, even.  In fact, it’s the best book I’ve read this year, and though it’s early days to be positing that with any gravitas, I think AVFTGS will take some beating.

The book begins innocently enough, in medias res with the clichéd but nonetheless effective framing device of a story told from a psychologist’s couch.  The opening line is even charmingly self-aware of this narrative convention; ‘It began in the usual way’.  Here we meet Sasha, a kleptomaniac PA with a penchant for other women’s purses (not a euphemism), and Bennie Salazar, a middle-aged, failing music mogul who tips gold flakes into his coffee in the hope of revitalizing his waning libido.  It’s a nice little metaphor that ties money to sex and power in Bennie’s industry.

But from these humble beginnings things get weird and wonderful pretty darn quickly.  The book’s non-linear narrative bounces around from 1970s San Francisco to near-future cityscapes (2020, or thereabouts) with confidence and clarity: never feeling directionless or trendy. What’s more is that no two chapters concern the same character, and no two chapters are told in the same way.  The unifying factor for the novel’s large dramatis personae is that their lives are all tied up (either explicitly or tenuously) with Sasha’s and Bennie’s.  Thus A Visit from the Good Squad forms the literary equivalent of the cinematic ensemble piece: several microcosms of literature, all stylistically different, but fused together by the book’s chief concerns: time and loss.  In recent months, several of the book’s chapters have been successfully published as isolated short stories.

Throughout AVFTGS, Jennifer Egan uses every trick in the narratologists’ book to tell her tale: each chapter is defined by its own stylistic idiosyncrasy, and these are as diverse as the novel’s cast.  First person narrators, third person narrators, even second person (the much under-used reader-inclusive ‘you’) pepper the novel’s multiple sections.  But the diversity doesn’t stop here: there’re child narrators, chapters consisting of celebrity-gossip journalism, extracts from fictional military histories and psychological journals; there’s magical realism, drug-induced stream-of-consciousness writing, even (a highlight of the book) a journalistic movie-star interview which descends into a sinister rape confessional.  Chapters are also codified with strange combinations of numbers, letters, roman numerals and long, rambling titles.

Normally at this point, the cynic in me would burst-free of the tight restraints I keep him under and accuse Jennifer Egan of being gimmicky, pretentious or show-offy.  Stuffing the pages of one novel with so much narratorial variety is usually a desperate ploy to keep the reader interested and to cover up a lack-lustre plot.  Either that or it’s the frantic machinations of a debut novelist, desperate to show-off their skill and bag some industry attention.  But here, thankfully, this isn’t the case: nothing is gimmicky; everything is reasoned and everything works.

I’m not going to go through every chapter, check-list style, and explain why its narratorial quirks are significant and necessary: but here’s one example of how form beautifully marries content in this novel.  If you know anything at all about A Visit from the Goon Squad, it’s probably this: one of the chapters is a Power Point presentation.  Literally.  The slides of the presentation are printed into the book, one after the other.  I’m tempted to start a polemic here about how new reading mediums/devices are finally becoming a significant form rather than just another means of textual transmission: but that’s not the point (I’ll save it for another day.  Possibly a rainy one).  Why are there 100 pages of Power Point presentation in AVFTGS?  It’s because the narrator here is the sister of an autistic teenager for whom the emotional construction of the world is baffling and unintelligible.  The graphs and charts of this presentation allow her to communicate with her brother, while simultaneously providing the reader with a psychological insight into the character.  It’s a refreshing change from the more guffy and sober attempts at portraying autism that have bothered the charts in recent years.

Parts of the novel are desperately sad: characters die young; others go missing and are never found; whereas some grow old without ever reaching the potential they secretly believe they harbour.  Time, decay, loss and regret are particularly significant themes; the book’s sweeping narrative lets the reader witness the entire lives of some characters, yet just brief, sad snippets of others.

Distance is also a subject: both physical and emotional.  A Visit from the Goon Squad is incredibly moving: an effect that Egan achieves by manipulating this theme of distance with considerable skill.  The protagonists are always at a remove from where they want to be: Bennie is impotent, Sasha is lonely, Doll’s best days are behind her, love is always unrequited and there’s constantly the horrifying feeling of time passing too quickly.  Semi-abstract nouns like ‘echo’ and ‘distance’ and ‘nothing’ are common, dominating the narrative in strikingly unusual ways.

But A Visit from the Goon Squad wouldn’t be so sad if it weren’t so funny.  The novel’s surrealist humour acts as a balancing counter-point to its gloomy subject matter, and in effect the comedy highlights rather than diminishes the book’s sadness: drawing attention to it: loss is all the crueller when it follows laughter.  A particular favourite passage of mine occurs around the mid-point of the novel, when an aging Middle East military dictator employs an American PR specialist to re-vitalise his image; with hilarious (albeit morally dubious) results.

The writing is beautiful and fluid (if I wasn’t so averse to it, I’d use the phrase ‘page turner’ – oops!).  There is the occasionally gaff, for example: some sentences are slightly too saccharine for my tastes ‘I’ll be curled around your heart for the rest of your life’.  Similarly, not every stylistic allusion hits the mark – a section of long, scientific footnotes (David Foster Wallace) fails to reach the comic and literary brilliance of the writer they allude to.  Plus a chapter with very little punctuation and no speech marks (Cormac McCarthy) doesn’t carry the literary gravitas necessary to be a success.

But these are minor niggles, and in no way detract from what is an accomplished, intelligent and highly experimental novel.  A Visit from the Goon Squad tackles dour themes with a wry sense of fun and a penchant for formal experimentation which (for the most part) is successful.  It leans to the post-modern, and in some places is plain wacky, but it’s encouraging that somebody is pushing the novel in a new direction.

10 responses to “A Visit from the Goon Squad – Jennifer Egan”