The best laid schemes o’ mice an’ men gang aft agley.  Several weeks ago I threw the gauntlet of literary fiction at my own feet, and set myself a challenge; of reading, and of writing.  Attempting to report on the entire 2010 Booker Prize longlist was a noble undertaking, but one which, regrettably, fell beyond my powers of endurance.  However, my failure wasn’t total. I did manage to read all thirteen nominated novels; it’s merely in the writing of reviews that I’ve been unsuccessful.

Circumstance hasn’t allowed me the time I need to sit down and write about all of the books I’ve read, and for that I apologise.  But these blog posts don’t write themselves.  Unbelievably, it takes many hours of blood, sweat, tears and toil to churn out such poor-quality pieces of clunk and cliché.  Soaring to the giddy heights of reviewerly mediocrity doesn’t come easy to me; yet I press on, and I will review all of the out-standing Booker nominees in the coming weeks.  In the meantime, I’d like to use this article to make some final comments on the Booker prize, as well as to commit some sickening and vainglorious acts of self-praise, as I congratulate myself on having read twelve pieces of serious literary fiction, and The Slap, in just eight weeks.  Haven’t I done well?

My Bookerthon journey has transported me literarily (not literally) to: Canada, Australia, Eighteenth-Century Japan, Russia, Greece, India, Holland, France, Ireland, Egypt, Africa, Nineteenth-Century Jamaica, and that favourite staple of the English metropolitan literati: South London.  I’ve never felt more well-travelled, or well-read.  A book-by-book tour of the longlist’s settings would show you half the world; I may even suggest a Booker Prize Cruise to P&O.  Next year, if I find myself richer and more eccentric, I could read every nominated novel while journeying through the country of its setting.  Though now I’ve stated this as my pre-facto modus operandi, the Booker judges will inevitably put-paid to the idea by nominating twelve books set in North Korea, Tibet, Iran and Atlantis.

But does breadth of time and place equate to breadth of style and theme?  The answer, you won’t be surprised to learn, is: no.  The Booker prize enjoys a prestigious reputation as the pantheon of modern English literary writing.  When Dan Brown and Stephanie Meyer dominate the bestsellers, we can always rely on the Booker judges to point us in the direction of quality, depth of emotion and profundity of thought.  At least, that’s what they’d like us to believe.  Ostensibly the prize represents the best literary fiction of the past twelve months; but if reading the entire longlist has taught me anything, it’s that the Booker committee’s definition of ‘literary’ is shockingly narrow.

Admittedly, I don’t pander to any stringent classification of ‘literariness’ whatsoever.  I like Simon Schama more for the lyricism of his prose than the content of his history.  Conversely, I find much of Dickens to be border-line unreadable.  ‘Literary’, to me, has always been an elastic and ambivalent critical term, a bit messy and hard to define.  However, the Booker judges are untroubled by such mitigating quandaries, and seem to have pinned down this ever elusive moniker with alarming precision.  If this year’s longlist is representative of the ouvre, then “literary fiction” is much narrower in scope than I ever imagined.

For the judges of the Booker prize seem to consider “literary fiction” to be a very specific brand of uber-realistic, psychologically sober, historically-informed utilitarianism: social fiction; Big Fiction.  Nothing about the longlist is non-linear, speculative, genre-defying or experimental.  What do the Booker nominated novels all have in common?  They all carry with them the cumbersome weight of plausibility.

Maybe I over-egged that a bit, so don’t get me wrong – narrative realism isn’t a bad thing, far from it; but it’s not the only stylistic idiosyncrasy that’s conducive to good writing. The judges don’t so much play it fast and loose with their choices as they do slow and tight.  None of this year’s nominees would be out-of-place as adaptations on the BBC’s autumn line-up.  With the possible exception of C, all are staid and familiar.  Accomplished, but unthreatening. 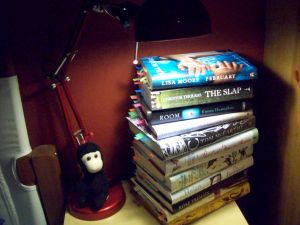 The 2010 Booker prize longlist felt like a place I’ve visited many times before.

In a previous post, I bemoaned the exclusion of such writers as Alastair Reynolds, Philip Pullman, China Mieville and Ian Banks from nomination; I even began to question the value of my own taste.  But having read the entire longlist for myself, the truth is now clear to me.  These books were excluded not because they’re bad fiction, but because they’re the wrong type of fiction.  The title of “Man Booker Prize for Fiction” is really a daring deceit; a misnomer of nomenclature.  The Booker Prize espouses such a narrow definition of ‘literary fiction’ that it has, in a way, spawned its own genre of writing.  It’s somewhat worrying that the adjective ‘Bookeresque’ could be used to define the narrative style of the entire longlist; so homogenised are the nominees.  China Mieville may compose the most sublime and insightful piece of writing ever produced, but if it’s a work of his transgressive experimentalism, then he’ll never be nominated.

So maybe it’s time that the Booker Prize FOR FICTION either re-defines its terms, or re-titles its…err…title.  Let’s be frank: the Booker is a genre prize, in much the same capacity as the Arthur C. Clarke or the CWA awards.  My laboured point, condensed, is this: the Booker Prize doesn’t represent the best of English language fiction, but the best of a certain type of English language fiction.  And this, I think, is a shame.  Alastair Reynolds’ books contain all the colours of human emotion; he just has space ships too.  If only the judges would give a nod-of-the-head to a work of crime, or horror, or sci-fi (or any of the portmanteau works of transgressive fiction currently doing the rounds), then I’m sure people’s eyes would be opened to the real breadth of brilliant, brilliant writing that’s out there.  The Booker judges could be responsible for banishing this new myth that literary fiction is a specific kind of realistic, safe writing.  Many of the Booker nominees are brilliant, but they’re all of a type.  I’m taking issue with the spread of the longlist, rather than any of its individual titles  And thus the Booker, despite how it’s marketed, isn’t a prize for all of fiction, but for a comfortable brand of predictable MOR narrative.

It wouldn’t take an implausible paradigm shift for the Booker to incorporate the weirder and more speculative aspects of literary writing; and in doing so it would  truly earn the right to bear the title ‘prize for fiction’.  All fiction.  As things stand, the Booker institution is perpetuating a false notion that weird, unrealistic or experimental writing isn’t literary or valuable.  The Booker Prize is a bully by neglect.

Sorry about that rant, something more melodramatic than British took hold of me.  But I hope that my point stands.  Of course, none of this means that the books which have been shortlisted are inadequate or poor; they’re just not the complete picture of current English literary writing.

Anyway; enough of what could have been, and on to what is.

Of the thirteen novels originally nominated, six were chosen to form this year’s shortlist:

In a Strange Room – Damon Galgut

I’ve already taken issue with the quality of several of these books, and I’m wary of repeating myself, so please peruse my previous posts if you’re at all interested in mythoughts.   Suffice and sufficient to say; I think that C by Tom McCarthy should win this year’s gong.  It’s a masterwork; its themes of transmission and loss are explored with a fearless devotion to intricacy, and a refusal to simplify or condense.  Parts of the novel manage to conduct a wonderfully violent attack upon the precepts of organised language.  In it the lexicon of technology is converged with that of grief in an unusual yet moving way.  It’s never contrived, and through constant yet subtle literary references, C manages to make extraordinary points about the interconnectedness of language, literature, life and loss.  It kicks-ass and you should read it.

And so I am glad that I decided to embark upon this ill-fated but interesting reading project.  It’s been a learning experience.  Without it, I probably wouldn’t have come across such brilliant books as C, The Thousand Autumns of Jacob de Zoet, or Room.

Yet despite discovering these novels, I won’t ever be undertaking such a reading project again.  Unless it’s for money.  The more I read, the less I enjoyed myself; and as the weeks progressed, this challenge began to feel more like a test of my readerly stamina than a quest to discover new, great literature.  I did enjoy several of the books on the longlist; but many others I disliked, even hated.  I forced myself to spend many long hours ploughing through books that would otherwise never have interested me.  And I regret having to fritter away my time on such literary abortions as The Slap or Helen Dunmore’s The Betrayal.  Yet being the conscientious tyke that I am, I was determined to finish every book, no matter how tedious the reading experience.  See? I suffer for my art.  Or, rather, for certain writers’ lack thereof.

Another point that stuck me, like a crowbar to the back of the head, was the utter futility of comparing so many books.  Examining such contrasting novels as Howard Jacobson’s Jewish comedy of manners and Emma Donoghue’s thriller of childhood incarceration, then attempting to resolve which one is ‘best’, seems a somewhat facile undertaking.  I’m aware that it’s the only way that one can judge a prize such as the Booker; but I don’t envy the judges their task.

So here’s another of the lessons this experience has taught me: many books are incomparable, and arguing ( for example) that Trespass is a better murder story than The Long Song is a slave narrative just strikes me as…stupid.  In the free country of the Redroom, at least, it’s not how things are done.

Ultimately, the deeper I dug, the more frustrated I became.  Firstly, with the limited scope of the books that were selected for the longlist (the usual spread of historical fiction, family dramas and books by Peter Carey); secondly, and by association, with the amount of my favourite fiction of the year that wasn’t nominated; and thirdly, with the complete banality of comparing so many different books, in order to discern an individual winner.  I know the Booker prize is a force for good; if nothing else, it draws attention to niche writing that would otherwise never find its way into the bestsellers chart.  And I am glad that I didn’t detect any vein of misguided political correctness running through the judges’ choices; as is so often rumoured to be the case.

But mostly, I just couldn’t wait for the process to be over, so I could once again walk in the free gardens of literary choice, where my taste isn’t dictated to me, and where I can read whatever I choose, whenever I choose it.   If the judges ever decide to shake things up by nominating fewer works of historical fiction and family saga in favour more left-field and experimental novels, then give me a call.  But as things stand, my final realisation is this: I couldn’t give a crap about the Booker prize.

5 responses to “Tomcat’s Bookerthon: a conclusion.”