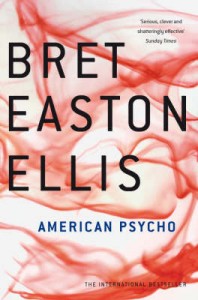 Before writing this review, I read/perused/mused upon a lot of other people’s blogs/thoughts/ideas and I’ve discovered that American Psycho has an unusual culture of criticism surrounding it.

It seems to me that most people who claim to love American Psycho are also the type of people who want to be seen loving American Psycho, because of what they think the novel represents.  They belong to a group of intellectually image-conscious tools who enjoy wallowing in an insipid sea of literary buzz-phrases like ‘post-Dostoyevskian’, ‘anti-capitalist narrative’ and ‘existential discourse’, without any attempt to describe what they actually thought was good or bad about the book.  Ironically, this simple, broad-brushed and trendy approach to review writing gives the impression that the reviewers themselves are nothing more than trendy, artificial clones of one another – not unlike the habitual ‘yuppies’ that Easton Ellis is attempting to lampoon.

So, with this in mind, I shall attempt to be as honest, concise and unconceited as possible in my review, without merely slapping unhelpful labels upon the text.  Firstly, I found this book both shocking and disturbing; its graphic scenes of sadistic rape and violent murder went way beyond what I expected in terms of their depravity, cruelty and length.  While I read the first-half of the novel silently urging the gory activity to begin, I read the second-half desperately wishing the violence would end.

American Psycho is thus a strange, double-edged sword of a book; partly a humorous exposé of eighties/early nineties’ yuppie culture and partly a shocking noir which examines how a society’s obsession with image, money and blandness could have very disturbing results.  The novel is most successful, however, when these two themes converge, and there is a melding of the satirical with the shocking.  Moments of satire (such as the running-joke of young Wall Street bankers perpetually mistaking each others’ identity) meet with moments of seriousness (nobody is quite sure whether a certain character is missing, or being seen everywhere) to form the best portions of the novel.  Unfortunately, these moments are rare and late-in-coming.

The fact that Ellis takes so long to find his feet, both in his style and narrative, is this novel’s major short-coming.  The first half of the novel is a repetitive tedium of all-too-similar scenes and actions; it’s only merit being that this may be intended as a clever literary ‘echo’ of the lives of the characters.  Yes he makes some good points about societal self-indulgence and vacuous self-obsession, but these points are few and far between; and for a novel of this length, I was expecting a deeper exploration of themes, rather than constant repetition.

Ultimately, I found American Psycho to be a successful if flawed book; an intelligent comedy of manners with a disturbing penchant for shock.  It’s just a shame that much of the reverence and over-hype surrounding the novel comes from the book-world equivalent of yuppies; trendy image-conscious types who want to be seen lauding as genius what is, in fact, just disturbing and not as complex as it appears or they’d like it to be.